AS SEEN ON TV: LORD NELSON

On this date in 1806, Admiral Horatio Lord Nelson received a state funeral and is interred in St Paul's Cathedral. 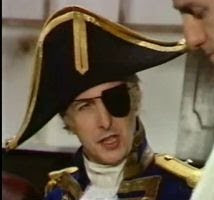 AS PLAYED BY:
Eric Idle

From Wikipedia:
Nelson's corpse was unloaded from the Victory at the Nore it was taken to Greenwich and placed in a lead coffin, and that in another wooden one, made from the mast of L'Orient which had been salvaged after the Battle of the Nile. He lay in state in the Painted Hall at Greenwich for three days, before being taken up river aboard a barge, accompanied by Lord Hood, Sir Peter Parker, and the Prince of Wales.

The Prince of Wales at first announced his intention to attend the funeral as chief mourner, but later attended in a private capacity with his brothers when his father George III reminded him that it was against protocol for the Heir to the Throne to attend the funerals of anyone except members of the Royal Family.

The coffin was taken into the Admiralty for the night, attended by Nelson's chaplain, Alexander Scott. The next day, 9 January, a funeral procession consisting of 32 admirals, over a hundred captains, and an escort of 10,000 troops took the coffin from the Admiralty to St. Paul's Cathedral. After a four-hour service he was laid to rest within a sarcophagus originally carved for Cardinal Wolsey.