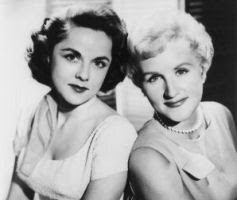 David Nelson wasn't the only member of Toobworld's League of Themselves to pass away in the last few days. Margaret Whiting may have been better known as a big band singer, but she and her sister also starred in a 1950's sitcom in which they played variations on themselves. They were still the Whiting sisters; Margaret was a singer not quite as famous as her Trueniverse self, and Barbara was a coed at UCLA.

Their family tree veered off from that in the real world, however, with the marvelous Mabel Albertson as their mother. Perfect casting to my mind - just look at the three women together in this clip:

It was tempting to make the claim that Mike Connors was working undercover as Joe Mannix, but it's easier to just keep this as one of the many examples where there is just no connection between two Toobworld citizens who happen to resemble each other.....

Speaking of Margaret Whiting, Yahoo's The Judy Garland Experience is paying tribute to her all this week. Along with the weekly uploading of ultra rare Garland tracks we also have several rarely heard and never released Margaret Whiting performances.
Included in the mix is a complete set recorded at Rainbow And Stars in the late 80's, highlights from Margaret's stint as 1946's Voice Of Continental Can Company, television appearances, other concert performances, out of print studio sessions, and more.
If you are a Whiting fan you will not be disappointed:
http://movies.groups.yahoo.com/group/thejudygarlandexperience/