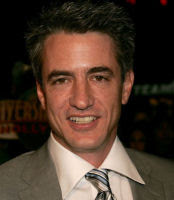 I say I don't write about pilots, and here I go again....

It's being reported that Dermot Mulroney has been cast as Jim Rockford in a new version of 'The Rockford Files'.

And the remake of 'Hawaii Five-0' is a bad idea.

The remake of 'Battlestar Galactica' worked, but that was on a niche channel. There are higher expectations with the major networks. And remakes seldom work.

'Hawaii Five-0' should have been all about a new generation of Five-0 cops, working in the (acknowleded) traditions of the original Steve McGarrett. But there's no way this new crew -even with Grace Park and Daniel Dae Kim on board - will survive comparison to the originals.

The same with Jim Rockford. What were they thinking? How can they expect to erase people's memories of James Garner in the role?

A nephew? That could have worked. Or somebody with a whole different name in the same situations. Sure, put him in a trailer on the beach with his phone in the fridge. Just don't say he's the Rockfish.

At any rate, both shows will have to be relegated to the TV dimension of remakes if their situations remain the same.....

I think the only way this might work is to pull a Maverick (the Gibson movie) and have Jimbo leave the trailer, the answering machine, and the biz to Cousin Jimmy (my preference, Luke Wilson, who must be about ready for Prime Time if he's hawking cellular service). The Rockfish would come back from his permanent fishing trip every once in a while to dispense a little Rockyian wisdom. Mulroney, not so much.

オテモヤン said...
This comment has been removed by a blog administrator.
11:15 PM