TODAY'S TWD: THE SHOT HEARD ROUND THE WORLD 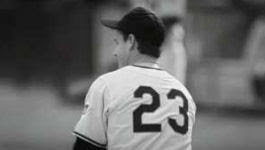 In a promotional blipvert for ESPN, the truth behind Bobby Thomson's "shot heard round the world" is revealed. At least, the "truth" for the televersion of that historical event.

Apparently a reporter was talking about food and a particular meal which "brings the heat". He had to shout to be heard over the crowds, and that particular phrase came at a point when the surrounding crowd of fans was quiet. So Thomson allegedly overheard the remark and thought it was a challenge to him.

Here's how it came about in the real world, courtesy of Wikipedia:

In baseball, the "Shot Heard 'Round the World" is the term given to the walk-off home run hit by New York Giants outfielder Bobby Thomson off Brooklyn Dodgers pitcher Ralph Branca at the Polo Grounds to win the National League pennant at 3:58 p.m. EST on October 3, 1951. As a result of the "shot" (baseball slang for "home run" or any hard-hit ball), the Giants won the game 5-4, defeating the

Dodgers in their pennant playoff series, two games to one.
The phrase shot heard 'round the world is from a classic poem by Ralph Waldo Emerson, originally used to refer to the first clash of the American Revolutionary War and since used to apply to other dramatic moments, military and otherwise. In the case of Thomson's home run, it was particularly apt as U.S. servicemen fighting in the Korean War listened to the radio broadcast of the game.
Thomson's homer, and the Giants' victory after overcoming a double-digit lead by the Dodgers in the weeks preceding the playoff, are also sometimes known as the Miracle of Coogan's Bluff.

The play has been worked into the history of Toobworld, thanks to the TV series 'Sports Night' and 'M*A*S*H'.

Again, courtesy of Wikipedia:
The ABC television show 'Sports Night' used the "Shot Heard 'Round the World" in 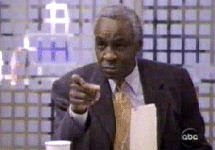 its episode "The Giants Win the Pennant, the Giants Win the Pennant", written by series creator Aaron Sorkin and former 'Roseanne' writer Matt Tarses. When Sports Night anchor Dan Rydell (played by Josh Charles) finds out that his boss Isaac Jaffe (played by Robert Guillaume) had been at the Giants game, he wants to use him in a feature story, despite Isaac's protests. Dan eventually learns that, as a cub reporter Jaffe did cover the game, but missed the crucial ball - he was in the bathroom washing his hands because Branca was said to be notorious for taking his time warming up before pitching.

In the 'M*A*S*H' episode "A War for all Seasons", the previously baseball-apathetic Major Charles Winchester is encouraged by Corporal Klinger to invest heavily in wagers that the Dodgers will win the pennant, and is subsequently heartbroken by the loss. He initially listens to the game on the radio, which is a recreation of Hodges' call.

watch a Fox Movietone News replay of the game. When Thomson's home-run scene appears, along with Hodges' recorded commentary, Winchester growls insanely, slashes the screen, and, still angry with Klinger, bellows, "Where is that Lebanese mongoose?" Fade out.)