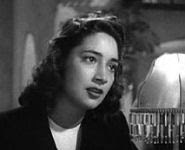 Actress Joy Page has passed away at the age of 83. She is best known for her first role, as Annina Brandel, the teenaged war bride in 'Casablanca' who almost did anything she had to in order to obtain exit visas for herself and her bridegroom. 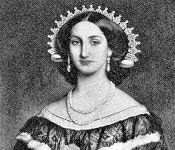 and falls in love with the beautiful Princess Maria Felitzia. Her royal highness has just arrived from Europe to marry a man she has never met, General Dubeauchois, an officer in the French Army.
The wedding has been arranged as an affair of state and the princess has been led to believe that the General is a young, handsome and virile soldier.
She is horrified to discover that her future bridegroom is fat, middle-aged,and egotistical. In fact she'd much rather marry Cheyenne. But it is not to be. At the end of the episode Princess Maria sails back to the old world leaving Cheyenne broken-hearted standing on the dockside watching her ship sail away.
[Thanks, DWMcG!)

One of the necklaces worn by the Empress Carlotta would one day be reproduced and sold to the general public. (Unfortunately it appeared to be a monstrosity that only women could recognize.) Nearly a century after Empress Carlotta wore the jewelry, Mel Cooley's cousin sold a replica to Robert Petrie to be a gift for his wife Laura. 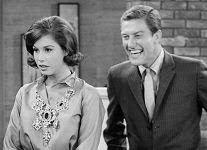 She hated it. Hilarity ensued.

So Joy Page's performance as the Empress Carlotta, and perhaps even the jewelry she wore in the "Border Affair" episode, links 'Cheyenne' to "Empress Carlotta's Necklace", an episode of 'The Dick Van Dyke Show'.

Step-daughter of Jack L. Warner, which is generally agreed to be the reason why she got the role in "Casablanca" and maybe why she got any work at all - most of her TV appearances were on Warner Brothers series.