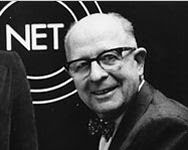 One week ago, James Day passed away at the age of 89. He was an instrumental part of public broadcasting in its infancy as an executive as well as an on-air host for two interview series with real heft to them, 'Kaleidoscope' and 'Day At Night'.
Here's an excerpt from his New York Times obituary, written by Dennis Hevesi:
To the public, Mr. Day was probably best known as the host of a weekly interview program in the late 1950s and early ’60s called “Kaleidoscope,” and then, in the 1970s, of a nightly show, “Day at Night.” Both were broadcast by many public stations around the country.
The notables Mr. Day interviewed for “Kaleidoscope” included Eleanor Roosevelt, Buster Keaton, Robert F. Kennedy, Bing Crosby, Aldous Huxley, and Alexander Kerensky, one of the leaders along with Lenin of the 1917 Russian Revolution. Mr. Day presided over the program while also serving as president and general manager of KQED.
His guests on “Day at Night” also took in quite a range and included Irving Wallace, Noam Chomsky, B. F. Skinner, Art Buchwald, Agnes de Mille, Edgar Bergen, Ozzie Nelson, Gloria De Haven, Ann Landers, Ayn Rand, Ray Bradbury, Aaron Copland, Alger Hiss and Muhammad Ali.
A 1974 article in The New York Times about “Day at Night” said that Mr. Day’s objective was “to create a record of the person.”
BCnU....
Toby OB
Posted by Toby O'B at 11:02 AM

Labels: As Seen On TV, Hat Squad, League of Themselves, Special Guest Appearance