And now for something completely different for this month's "Fanficcer's Friend" - a picture from the news, rather than from old movies...... 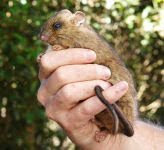 This is a picture of a greater dwarf cloud rat which was believed to live in the Philippines, high up in the canopies of their tall trees which may be their only natural habitat. It's probably what kept them safe from predators. I find it fascinating that they may never have touched the earth below!

However, the greater dwarf cloud rat had not been seen for the last 112 years.

According to Lawrence Heaney, who is the mammals curator at the Field Museum (and who lead the team that rediscovered the beastie):

"This beautiful little animal was seen by biologists only once previously — by a British researcher in 1896 who was given several specimens by local people, so he knew almost nothing about the ecology of the species Since then, the species has been a mystery, in part because there is virtually no forest left on Mt. Data, where it was first found."

Heaney's associate William Stanley (collections manager of mammals) said, "Finding this animal again gives us hope for the conservation of one of the most diverse and threatened mammal faunas of the world."
So why am I including this picture when "Fanficcer's Friend" is supposed to be supplying inspiration for stories about favorite TV characters? (Yeah, yeah, I know - big no-no! Big whoop.) 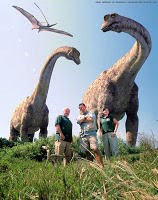 Here's the idea: What if the greater dwarf cloud rat had become extinct? If so, where did this one come from?

Taking a page from "Star Trek IV: The Voyage Home", maybe somebody went back in Time to bring them back into our time period.

Although the team featured in the series 'Prehistoric Park' did this sort of thing with dinosaurs and extinct mammals, maybe that same technology was employed for other animals. Maybe they were working in conjunction with the Time Agents of 'Voyagers!'. (It's the Toobworld contention that until otherwise contradicted, Jack Harkness and John Hart of 'Torchwood' were members of this organization.) 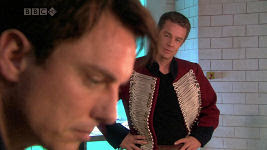 However, the Gallifreyan Time Lord known as the Doctor may have opposed this plan, as the extinction of the greater dwarf cloud rat could have been fixed in the timeline. And it wouldn't have to be the current Doctor, the tenth incarnation. The first Doctor was adamant that "One can not change History, not one line!"

So there you go, Fanficcers! Plenty of characters from TV shows to cross over and some at cross-purposes with each other. And something different for the plotline. (It looks like 'Doctor Who' will be actually dealing with a similar situation this season, what with all these mentions about the real-life disappearance of the honeybees.....)

And speaking of bees,