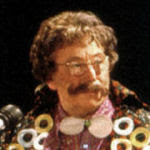 In the 1972 story of 'Doctor Who' entitled "Carnival Of Monsters", intergalactic showman Vorg attempted to communicate with the Doctor using Polari, which he described as the Telurian carnival lingo. If Vorg knew of the language, he may have learned of it from past visits to Earth, even if he did try to claim that it was Telurian in origin. As he was an intergalactic showman, much like his kinsman Farnum B [who was a recurring character in 'Lost In Space'], Polari as a language may have appealed to Vorg.

And in coming to Earth, Vorg may not have been traveling alone. His entourage may have included showfolk from the stars who settled down here to prey on the human population. These would be those mysterious Night Travelers we saw in the 'Torchwood' episode "From Out Of The Rain". 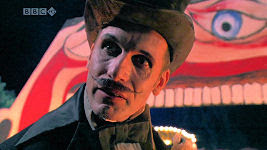 Here's what Wikipedia has to say about the Polari "language":
Polari (from Italian parlare, "to talk") was a form of cant slang used in the gay subculture in Britain. It was revived in the 1950s and 1960s by its use by camp characters Julian and Sandy in the popular BBC radio show "Round the Horne", but its origins can be traced back to at least the 19th century. Polari is a mixture of Romance (Italian or Mediterranean Lingua Franca), Romany, backslang, rhyming slang, sailor slang, and thieves' cant. Later it expanded to contain words from the Yiddish language of the Jewish subculture which settled in the East End of London, the US forces (present in the UK during World War II) and 1960s drug users. It was a constantly developing form of language, with a small core lexicon of about 20 words (including bona, ajax, eek, cod, naff, lattie, nanti, omi, palone, riah, zhoosh, TBH, trade, vada), with over 500 other lesser-known items.

Polari was used in London fishmarkets, the theatre, and the gay subculture. As Polari, it was used to disguise homosexual activity from potentially hostile outsiders (such as undercover policemen), but also because many gay men worked in theatrical entertainment where the lingo originated (including fairgrounds and circuses, hence the many borrowings from Romani in Polari). The almost identical Parlyaree has been spoken in fairgrounds since at least the 17th century and continues to be used by show travelers in England and Scotland. As theatrical booths, circus acts and menageries were once a common part of European fairs it is likely that the roots of 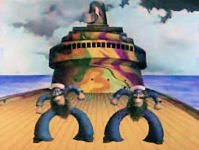 Polari/Parlyaree lie in the period before both theatre and circus became independent of the fairgrounds. The Parlyaree spoken on fairgrounds tends to borrow much more from Romani, as well as other languages and argots spoken by travelling people, such as cant and backslang.

It was also used extensively in the Merchant Navy, where many gay men joined cruise ships as waiters, stewards and entertainers.

On one hand, it would be used as a means of cover, to allow gay subjects to be discussed aloud without being understood; on the other hand, it was also used by some, particularly the most visibly camp and effeminate, as a further way of asserting their identity.

Which makes me wonder - Was Vorg addressing the Doctor in Polari because he thought he was a fellow traveler among the show folk? Or was it because he thought the Time Lord was homosexual? Either way, it must have been the shirt ruffles that tipped him off......

Below I'm listing some of the words to be found in Polari, those most likely to be used in Toobworld, no matter what the show (and no matter the reason it was being used): 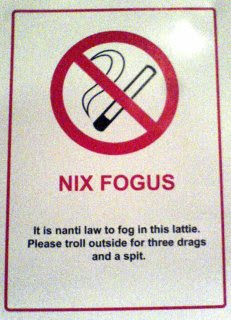 naff awful, dull, hetero
national handbag welfare, government financial assistance
nishta nothing, no (from Yiddish ????? - "there isn't")
palone woman
palone-omi lesbian
scarper to run off (from Italian scappare, to escape or run away or from rhyming slang Scarpa Flow, to go)
zhooshy showy

Among the shows that have used these terms have been 'Doctor Who', 'Porridge', 'Monty Python's Flying Circus', and 'Queer Eye For The Straight Guy'. On 'Porridge', you couldn't escape the presence of Norman Stanley Fletcher there in the prison without some variation of "naff" escaping his lips, which he used to replace expletives. (They weren't familiar with "frak" back in the 1970s.) His use of the phrase "Naff off!" became so pervasive, that even Princess Anne used it in public once!

You can find a much richer glossary of terms here.

One final question: How come the TARDIS didn't give the Doctor the ability to understand Polari?

You should see the episode of The Professionals where Bodie and Doyle go into a gay pub and inadvertently give the barman some odd ideas by accidentally using gay slang ("You army or navy?" "Army. I was in the paras." = "I like it rough")