Even though the character of Dr. Preston Burke, as portrayed by Isaiah Washington, is no longer a part of 'Grey's Anatomy as a cast member, the character's history is still tied up with the show. And within the current events of the show, Dr. Burke is still a part of their world, even if he isn't at Seattle Grace anymore, nor even in Seattle.

However, the actor doesn't feel that 'Grey's Anatomy' and ABC has the right to use his picture anymore to refer to the character - at least not without remuneration.

Isaiah Washington has filed a complaint with SAG over ABC's use of his picture in the most recent episode of "Grey's Anatomy."

The picture was seen in a newspaper clipping about Dr. Burke receiving a prestigious surgeon's award. (It would be Toobworld bliss if it turned out the award was the Cushing Descending Left Arterial Award which has been mentioned on 'St. Elsewhere' and 'Chicago Hope'!)

Apparently, if it had only been the newspaper article about Dr. Burke, there would have been nothing he could do. After all, the show does own the rights to the character. However, Washington feels they have no right to use his image without his consent, perhaps in much the same way that actors have rights protected in their contracts regarding the use of their image in promotional retail products like clothing, board games, and the classic lunchbox.

The Screen Actor's Guild and ABC were notified by Washington's attorney, Peter Nelson, that the use of his client's picture was inappropriate.

"They have the rights of the character to advance the story, but not the image," said Nelson. And he's expecting Isaiah Washington to receive a financial settlement because the producers failed to get his consent for the use of the picture.

So far as I know, ABC has yet to comment on the issue.

This could have an impact on the general concept of Toobworld. More and more, shows depend on their history and backstory to flesh out their little corner of the TV Universe. It may have started with the 'Star Trek' franchise, but it has come up in shows like 'St. Elsewhere', 'Babylon 5', and the assorted series of David E. Kelley on the various networks. The current best example of a show depending heavily on its past history would probably be 'Lost'. Let's face it, that series would be lost without those backstories. (When it comes to plays on words, I regret nothing!)

In fact, 'Lost' had a recent example in which the image of a character was used after the actress had already departed the series. In the episode "Je Yeon", Sun's TV was playing an episode of "Expose" dubbed in Korean, in which we saw Nikki Hernandez. Nikki had died a few weeks previously after being buried alive.

However, that scene had been one that was already used in the show - we saw the flashback in which she filmed the 'Expose' episode. So the producers had full right to use their own material over again. It often happens in soap operas as well. Washington is claiming that the use of the photograph is something new; it probably was never used in the show before. 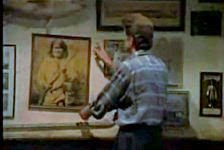 The closest thing I can think of for a comparison would be after Nicholas Colasanto died while he was still playing Coach on 'Cheers'. Afterwards, his framed picture of Geronimo, which he kept in his dressing room, was given a place of importance on the back wall in the bar, and I don't think any of his relatives would have minded that his presence was always present on the show. 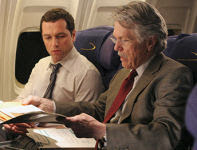 There's also the use of Tom Skerritt's picture as William Walker on 'Brothers & Sisters'. This time, the character is dead, but the actor is still among us. (Thank God for that! I think Skerritt is fantastic, and I hope he gets to play Daniel Faraday's Dad in a 'Lost' flashback.)

However, Skerritt is still actively involved in the series, appearing in flashbacks every so often - including last night's second season finale "Prior Commitments" (which I've only just finished watching).

One other example that comes to mind was an episode of 'Naked City', about which I've commented in the past. Harry Guardino played a man who was obsessed with the spectre of his father and the way his own life had turned out. The father was long deceased, and never appeared in flashback, but there was a portrait of him. And as far as I'm concerned, it was a picture of Jackie Coogan. There was no onscreen acknowledgement of his participation in this way - for alls I know, it could have been a prop from one of Coogan's earlier roles in TV or the movies. (As soon as I can get hold of that episode, I'll add a picture of that portrait so that you can judge for yourself.)

This may seem like a piffling matter, but Toobworld Central will be keeping an eye on how the case proceeds.....

I have a suspicion that Washington has cause in his complaint. Apparently one of the big issues in the current SAG negotiations (which I know thanks to Nikki Frinke) is an effort on the part of AMPTP to eliminate the current contract provision related to paying and actor for the use of a clip from a previously aired episode of a show. I suspect that any version of an actors image including a photograph.