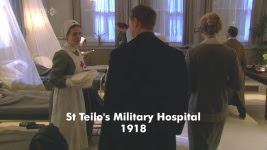 In the latest 'Torchwood' episode ("To The Last Man"), much of the action centers around St. Teilo's Hospital, both in 2010 as well as in 1918 - both time periods beginning to merge with the hospital as the nexus.

St. Teilo is a Welsh saint who seems to be more notable for what occurred after he died than for what happened during his life. One of the most celebrated legends about him tells how, on his death at Llandeilo, three churches claimed his body: Penally (his birthplace), Llandeilo Fawr (his chief church), and Llandaff. The clergy of the three churches prayed, then left the body in the church. In the morning, the body was found to have been miraculously triplicated, so that each church could have an authentic body to bury!

Here's an ancient text on the subject:

On the night of his decease, there arose a great dispute between the clergy of three of his churches, each asserting its authorities and privileges for obtaining his body; one, of which was Pennalun, and which claimed because it was there his ancestors had been buried, and therefore, the proper place by hereditary right; the second church, which was situated on the banks of the Towy, claimed it because it was the place of his residence, where he lived retired, and because he there gloriously ended his life; the third was Llandaff, and urged its claim on account of its having been his episcopal see, of its privileges and dignities, its consecrations and obedience, and of the unanimous voice of all the diocese, and especially because of its former state, and the appointment of St. Dubricius, and other fathers.
But at length, attending to the advice of discreet men, they had recourse to fasting and prayer, that Christ, the great judge, who is the true authority, and privilege of holy persons, should declare by some manifest sign, to which of them he would be pleased to commit the holy body of the Saint. And in the morning, a certain elder, looking towards the place where the body was, spoke with a loud voice, saying, “Our prayer, brethren, has been heard by the Lord, who deprives no one of his reward: Arise, and behold what things have been done by Christ the Mediator between God and man, that our dispute might be settled; and as in the life, so in the death of the holy confessor Teilo, miracles should be performed”
For, ho! they saw there three bodies, to which there was the same dimensions of body, the same beauty of countenance, (what more?) they had the lineaments of the whole frame, without any difference. So peace being restored, each with their own corpse returned homewards, and they buried the different bodies in those several places with the greatest reverence.
A Toobworld splainin? Time travelers of course. More specifically, the Doctor.
The body was stolen away after burial at the first site and after the burial at the second site. Those two corpses were taken away out of their time-streams to be brought back and laid beside each other along with the original body - thus creating a time loop. The tombs were then left empty at all but the third burial site and no one the wiser.
I don't know why this needed to be done; I'll leave that to the Lives of the Saints fanficcers, of which I'm sure there are SO many!
BCnU!
Toby OB
Posted by Toby O'B at 1:03 PM