'THE ROCKFORD FILES'
"BACKLASH OF THE HUNTER"

In order to shake off Jerry Grimes from tailing him, and to gather information at the same time, Jim Rockford went into the Mayfair Music Hall (where he was known by the staff) and set up the club's bathroom for the inevitable fight with Grimes to give him the advantage.  Got rid of the guy already in there; spread the liquid soap all over the floor; and loaded his fist with a roll of nickels.

The shots of him entering and exiting the theater provided three points of televisual trivia to explore for me: 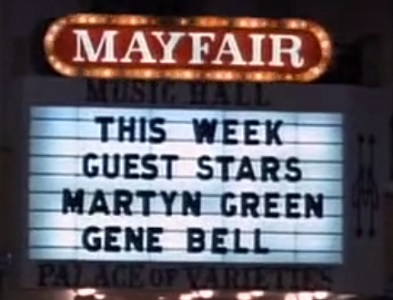 This theater was designed by architect Henry C. Hollwedel, and built in 1913 as the Santa Monica Opera House.

Milt Larsen, John Shrum and Thomas Heric transformed the venue into a Victorian music hall in 1972 and produced British variety shows there for 8 years. The ornate boxes and staff work were rescued from the grand old Belmont Theater, a major movie palace adjacent to the famed Bimini Baths at 1st and Vermont in Los Angeles.

In later years it later became the home for Chicago's 'Second City Television' and 'The A-List'.

In 1974, the theater was used to film the famous "Puttin' on the Ritz" sequence in "Young Frankenstein".

The theatre was damaged in the 1994 Northridge earthquake, and the building was demolished in 2010.


Lost a leg in an elevator accident.

Served with the Royal Fusiliers on the Western Front in World War I. Invalided out in 1918 with a severe leg injury. After recuperation for nearly a year, he went on to study at the Royal College of Music from 1919 to 1921. The following year, he got his first few bit parts on the musical stage and was then hired by the D'Oyly Carte Company.

The son of a concert tenor, he was best known for his interpretations of Gilbert & Sullivan, in particular as Major General Stanley in 'Pirates of Penzance'. Member of the D'Oyly Carte Opera Company from 1922 to 1951.

William Martyn-Green (22 April 1899 – 8 February 1975), better known as Martyn Green, was an English actor and singer. He is best known for his work as principal comedian in the Gilbert & Sullivan comic operas, which he performed and recorded with the D'Oyly Carte Opera Company and other troupes. 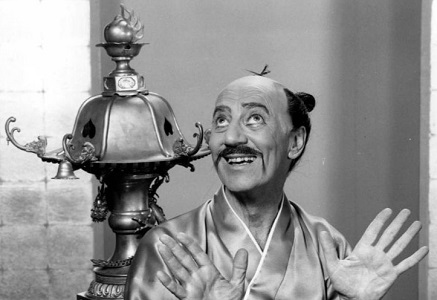 Of particular interest to me was that he directed Groucho Marx in a production of "The Mikado" and appeared in episodes of the 1966 'The Jackie Gleason Show: The Honeymooners', 'The Hallmark Hall of Fame' production of "Alice In Wonderland" as the White Rabbit, as Bob Cratchit in the live-action "The Stingiest Man In Town" (with Vic Damone and Basil Rathbone as Scrooge, Younger and Older respectively) in anthology series like 'Studio One', 'The United States Steel Hour', 'Kraft Television Theatre', and in a couple episodes of dramatic fare - 'The Defenders' and 'The Trials of O'Brien'.

Literally - that's all he has listed at the IMDb.  He must have spent a lifetime in vaudeville and burlesque.  I have no idea.  And Wikipedia didn't even have an entry for him, preferring instead to focus on Larry Gene Bell, a serial killer....

Both men had TV credits (although just one TV movie for Bell), so they contributed citizens to various TV dimensions throughout the ages.  But this marquee confirms their existence as "televersions" in at least one Toobworld as well.  It's just that they're "Unseen On TV."

Now, this pilot episode, as is, only exists in Prequel Toobworld because of the casting of Robert Donley as Rocky.  He was replaced for the series by Noah Beery, Jr. and that is the version of Rockford's life which exists in the main Toobworld.

But since Lindsay Wagner returned in a later episode that first season as Sarah Butler, we know her original adventure took place in the main Toobworld as well.  The first BIG difference was that Rocky looked different in both worlds.  But as I mentioned in yesterday's post, it looks as though she didn't have a brother in the main Toobworld, adopted or otherwise.  Instead, that little boy who grew up as her brother in Prequel Toobworld was instead a street artist in the main Toobworld.

Nevertheless, the rest of that adventure played out the same.  So the Jim Rockford in the main Toobworld also tangled with Mrs. Mildred Elias and also ducked into that music hall.  So I might as well assume Toobworld's Green & Bell were on the bill in Earth Prime-Time as well.

O'Bservation: And in Earth Prime as well.  I get this feeling they filmed that marquee as it was with the original announcement about Martyn Green and Gene Rule.....

I guess that's about all the trivia I can squeeze out of that marquee.....