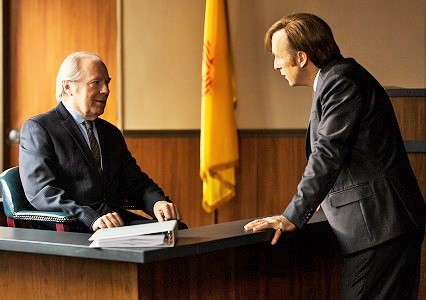 Jimmy hired Huell (another character originally seen on 'Breaking Bad') to slip a fully-charged cell phone battery onto his brother Chuck's person before he takes the stand to testify against Jimmy.  (Chuck is supposedly "allergic" to electro-magnetic energy and had demanded that all cell phones be not only disconnected but also handed in to the court while he was on the stand.)

When the ruse was discovered, Chuck laughed it off as an attempt to “split me apart at the seams, like a murderer confessing on an episode of 'Perry Mason'.” He believed that it was a drained battery, which was why he didn't pick up on it.

And that's when Jimmy loaded the batter back into the cell phone to show that it was fully functional.  Chuck proceeded to go boogatz on the stand, with a diatribe that is sure to snare an Emmy nomination at least for Michael McKean and probably for the scriptwriter, Gordon Smith, as well.

I had no problem with the mention of 'Perry Mason' as a TV show; I disabled that Zonk ages ago.  In a general sense, just about everybody in Toobworld is going to have a TV show made about them; at the very least, characters based on them will be making guest appearances in somebody else's show.  And with this famous lawyer from Los Angeles, the original "Mr. L.A. Law", he would not only have a TV show about him and his celebrated cases (which would star an actor who looked like him, one Raymond Burr), but he often appeared on the evening news broadcasts back then - not just the local news but nationwide as well for some of those trials.

I just wish Mr. Smith had trusted in his audience more and not been so specific that it was a TV show, especially concerning a series that is so ingrained into the consciousness of the audience.  Had Chuck said "like a murderer confessing TO Perry Mason", the audience back in the Trueniverse would have understood that it was still a reference to a TV show, but adherents to the "fictional reality" of a TV Universe could have seen it as just a reference to actual events in Toobworld.

But like I said, it's not insurmountable.  And it helps build the tally of non-Zonk references which will help carry Perry Mason into the Television Crossover Hall of Fame later this month. 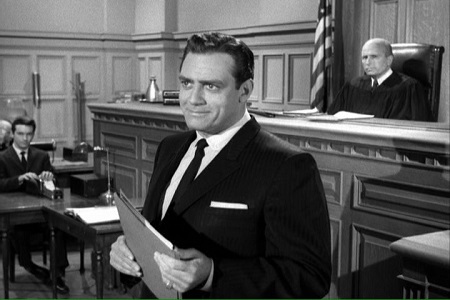 Chuck is too pedantic (at all times) to not point out that PERRY MASON is a TV show. He sees everyone as incapable of getting the reference unless he spells it out, one reason that everyone has always liked his screwup brother better.

Also, what really set Chuck off on his rant was not the battery chicanery itself, but the prosecutor referring Chuck's "mental illness" instead of his "mental health", as he had earlier. The statement of him having a mental illness as fact set him off on his rant: "I'm not crazy!"

A bit derivative but still a great episode of a really good show, one of the best on TV right now.