Despite the protestations of the First Incarnation of the Doctor, the entire timeline of Earth Prime-Time was rewritten by Helen Cutter by her interference during a primeval age in the history of the planet.  It didn't create a divergent dimension; it was completely wiped out by her meddling.  A human was able to achieve something cataclysmic which even a Gallifreyan Time Lord like the Monk was never able to do - she changed History.

Helen Cutter.  Remember that name.  Not that there'll be a quiz later.....

There will be more about Mrs. Cutter in June, but for now, here are the basics - with the revision of the timeline, some TV characters were wiped out of existence, others created by the change.  One of the major revisions is that the President of the United States in the early 1970s, Henry Talbot McNeil, vanished to be replaced by the line of succession we know in our own world.  What had once been the administration for McNeil became the administrations of Nixon and Ford.

There was another example from the politics of "Telemerica", but on the gubernatorial level..... 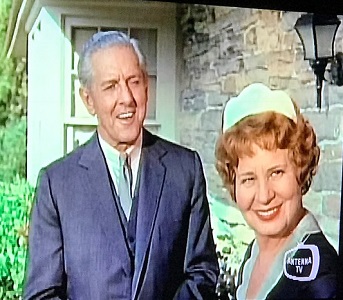 'HAZEL'
"LUNCHEON WITH THE GOVERNOR"

Lawyer George Baxter and his family lived in California in a house that was built by that known "architectural plagiarist" Frank Reich.  (The Baxter house had the exact same design as the home of Russell Lawrence which he shared with his teenaged daughter Francis... better known as 'Gidget'.)

In September of 1964, George Baxter was to host the state governor for a luncheon.  On the suggestion of his maid, Hazel Burke, Mr. B invited the governor and his wife and his entourage to come to his home for a luncheon catered by Hazel.

And of course, because of the involvement of Hazel, problems arose and hilarity ensued. 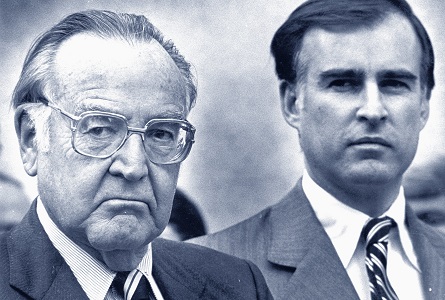 And you would be wrong.

In Toobworld, the California governor at that time was the Honorable Willard J. McGuire.  He was married to Sarah, whom he met at a New York nightclub during the 1950s.  (Based on his age at that time, Sarah may have been his second wife after he became a widower.)

Governor McGuire more than likely covered the term served by Brown in the real world, from 1959 to 1967.  (More than likely he was replaced by Ronald Reagan just as Brown was.  In a 1971 episode of 'Here's Lucy', a state employee at the unemployment office proved to be a serlinguist and addressed Governor Reagan through the Fourth Wall.  "Hey, Ronnie!  I quit!  I'm going back into show business!  Don't you wish you were?")

By the time of this 'Hazel' episode, Governor McGuire was already looking ahead to the 1966 election, exhorting those who had gathered outside the Baxter house to remember his name (rather than his opponent Arnold Wilberforce) when the election rolled around just over two years away. 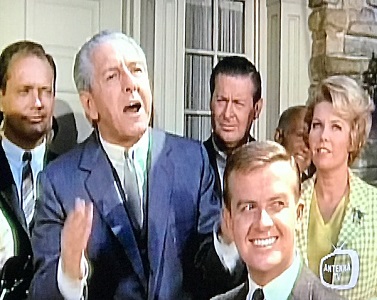 But then Helen Cutter bleeped things up and caused the timeline to be rewritten so that Edward "Pat" Brown was the governor just as he was in the real world.

And what exactly was Pat Brown doing in the first timeline for Toobworld around that time?

'THE BOLD ONES'
"THE STRANGE SECRET OF YERMO HILL"

A serviceman is found intoxicated in the apartment of a young woman who appears to have been strangled to death. The young man remembers nothing about how she died, but there appears to be no possible way for anyone else to have gotten out of the apartment. Brian locates an acquaintance of hers who brags that he can provide an answer, but refuses to tell him any more.

In this episode, Edward G. Brown is listed as "Judge".  It could be, and I'm going to stick by this, that Brown was playing himself and that the episode was playing out in the original Toobworld timeline where he was a California jurist.

After the new timeline began, that judge was probably somebody else entirely; we just never got to see it play out again.  Meanwhile, former Governor "Pat" Brown's televersion appeared as himself on the Toobworld incarnations of shows like 'Tonight', 'Meet The Press', 'What's My Line?', and 'The Merv Griffin Show'. 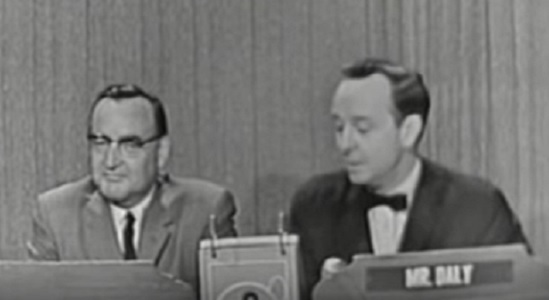 OTHER SHOWS CITED:
'Gidget'
'The Mary Tyler Moore Show'
'General Electric Theatre'
'Primeval'
'Doctor Who'
'Voyage To The Bottom Of The Sea'

Once upon a time, one could buy blueprints from the Sears-Roebuck catalog (many schools were built from the Sears model, hence the familiar architecture throughout the US). Might these homes that match simple be a matter of one firm creating a popular design that was repeated, or is it definitely plagiarism in Toobworld?

That is a possibility, but as they used to say in 'Monty Python's Flying Circus': "Where's the sport in that?"

Not that I adhere to the idea that "All magic dies at the touch of the commonplace", but whenever possible I think a splainin should reflect the nature of the universe in which it would be employed in order to enhance the differences from the real world - without going overboard on the concept.