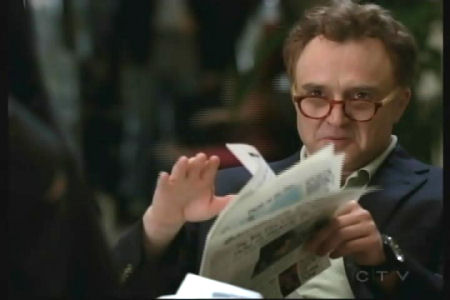 "Look at me, I'm just a regular guy.
But you thought I'd have horns, didn't you? Right?
I'm not a monster, I'm not the devil.
I'm just another human being,
with flaws and vices and problems just like anybody else."
Timothy Carter
'The Mentalist'
And so here we are - at the end of November and the end of our study of Jack the Ripper as seen on TV. We've seen the alien Redjac in its many hosts in the past, beginning in the Victorian Age, and we've tracked it through the 20th Century. We know where it will be in the future as it will leave earth by the 22nd Century to strike terror in the Martian colonies and beyond. Eventually it will be destroyed by the crew of the Enterprise in 2267. (And unless it does make a return to TV, it's really most sincerely dead at that point. The graphic novel format and tie-in literature do not count in the Toobworld Dynamic.)

So the only question left to ponder is - Where is Redjac today?

The concept of Jack The Ripper being alive in the present day in Toobworld was last addressed in the early years of this new millennium. But Redjac will be on Earth until 2105 when it will begin a new reign of terror in the Martian colonies. So for the next century, Redjac is in TV Land, committing murders in major cities around the world in a variety of guises.

And I think we've been seeing Redjac at work for the last couple of seasons on TV.....

I'm adding 'The Mentalist' to the roster of TV shows in which Redjac has been involved. 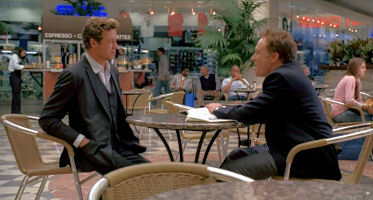 'The Mentalist' debuted in 2008, and Red John had been active for over five years before that. So it's pozz'ble, just pozz'ble, that Redjac created this new persona for his hosts after 'Special Unit 2' drove it out of the body of that shape-changing ogre in Chicago.

In 2003, Red John slaughtered Angela and Charlotte Jane, the wife and daughter of Patrick Jane, a fake psychic who dissed Red John on television by bragging about the profile he made about the killer for the authorities. Since then, Jane has been working as a consultant for the CBI (California Bureau of Investigation - apparently it's real.) in the hopes that eventually his path will cross that of Red John again someday.

And Redjac as Red John has engaged Patrick Jane several times since that first deadly attack - killing former allies, rivals, copycats, potential threats to its present identity, others who have insulted its "artistry". It even contacted Patrick Jane in person twice. 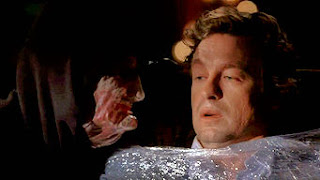 The first time, Jane was powerless to do anything about it as he was bound to a chair. Red John wore a mask and concealing robe on that occasion, probably because it was too early in Red John's game plan to reveal its host to its most dogged pursuer since Carl Kolchak, Sir Guy, and Dr. John York. Besides, it's my belief that Redjac was at that moment possessing Jane's fellow "psychic" Kristina Frye. If you listen to Red John as "he" recites the William Blake poem "Tyger, Tyger", "his" voice sounds decidedly female with a false depth. (Although it could be forensics investigator Brett Partridge who has a higher-pitched speaking voice.)

For months Kristina Frye was missing, even believed murdered by Red John, even though "he" likes to stage his victims in a theatrical fashion to be discovered. But eventually she turned up, but too far gone mentally to be of any use in tracking down Red John. I think Redjac used her as its nesting host, as it once did with Dr. Sir William Gull, and the experience, being exposed to all those visions of its hellish existence in its memories, drove Kristina deep into a catatonic fugue state. When Jane was able to make contact with her, Kristina actually believed she was already dead - why should she be any different from past hosts of Redjac? 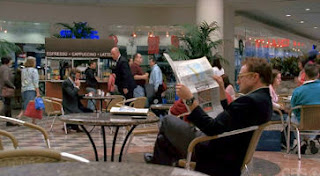 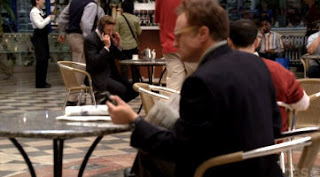 The next time Patrick Jane faced Red John, the serial killer wasn't ready for the encounter. Jane discovered him in a shopping mall food court, observing Jane's every move. Although he at first denied being the serial killer, he eventually admitted it, taking pleasure in teasing Jane with intimate details on how his wife and daughter died (like the way they smelled of lavender and soap and sweat and kids' shampoo).

That was at the end of Season Three and by the first episode of Season Four, Patrick Jane was convinced that the man he killed wasn't actually Red John, but an acolyte. And this man, Timothy Carter, was still deserving of death - which Jane luckily was able to prove in time to save a young girl's life. 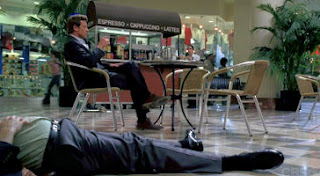 But if we apply my Redjac theory, we can still claim that it was the real Red John, that is to say, the alien Redjac, who was using Carter as its vessel. And so it's likely that Redjac was deliberately taunting Jane, perhaps knowing that he was carrying a concealed gun. And at the fatal moment, Redjac was able to flee Carter (albeit without the telltale Wilhelm Scream) to a nearby host - perhaps the coffee wagon girl, who ran off after the shots. (Perhaps Redjac only used her to get it to a more suitable host in the mall.) 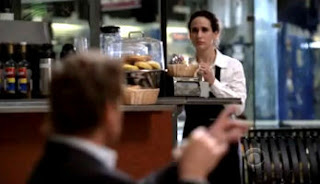 No matter who they ultimately reveal to be Red John, it will be my contention that that person is merely the vessel for Redjac. And it could be that it's not the same human host who killed Jane's family, or who killed CBI secretary Rebecca (who also served as Redjac's host only an hour or so before when CBI agents were gunned down), or who burned the serial cop killer to death... or even the lover of the blind woman. 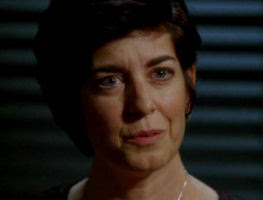 I'm not the only one who thinks Red John could be more than one person. Keith McDuffee of CliqueClack TV had the same idea:

"I have to say that I'm leaning more toward Red John ultimately being more than one person — more of an association of people — and, in the end, Jane will find that there’s just no end to it all."

He's also spreading the word on another theory about whom Red John really is:

"One unpopular theory I particularly like is that Patrick Jane is Red John, and — due to having a dual personality — he doesn't know it. Something he said in this episode (Season 4, Episode 1 "Scarlet Ribbons") made me raise an eyebrow at that: 'Typical psychopath behavior, inserting himself into the investigation.' Say, maybe that’s what Jane’s doing now in his hunt for Red John?"

Even if it turns out that Patrick Jane is Red John, this theory will hold up. It could be that Redjac didn't possess him until the last possible moment, in order to frame its most ardent hunter for its crimes. We might see someone walk away in that scene who had been the previous host for the alien monster and we'll never know.....

To see a great recap of the Red John arc on 'The Mentalist', click here.


Once 'The Mentalist' has run its course, where does Redjac go from there? If I'm still around, I'd look for the next instance of a truly horrific serial killer (as if there were any other kind!), hopefully fictional, in some future TV series. It could be that between its latest killings as Red John, Redjac has been traveling the country infesting new hosts to facilitate its feeding. These could be some of the killers we've met in episodes of 'Criminal Minds' and perhaps in 'Fringe' as well.....

Beyond that, it's not for me to say, but for the televisiologists who come along after me.

After all, we've got nine decades in which it will need to feed on fear before it reaches Mars in 2105.

And besides, if I look too deeply into the subject, Redjac might just come after me like it did Sir Guy!

I hope you enjoyed the series.....

For more about Red John on 'The Mentalist', check out these articles by the aforementioned Keith McDuffee. The writer for CliqueClack TV is pretty obsessed with the character's true identity, although I don't think he's ever entertained the notion that Red John is Redjac......

And here are some theories on the identity of Red John from the wiki for 'The Mentalist'..... 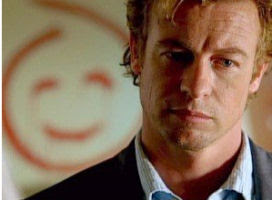