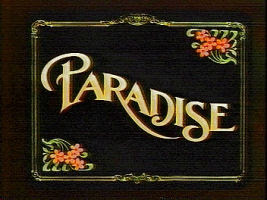 "New York's a real city, Claire.
Chicago's a real city.
Paradise... has got a way to go...."
John Taylor
'Guns of Paradise'
For the final July entry into the TV Crossover Hall of Fame, we're heading to Paradise! No, there won't be 72 virgins waiting there - we're talking about the Western town in California, which even had its own series.

Paradise, California, is a real town, but its history and current development is probably a lot different in the TV Universe than it is in the Trueniverse. Over the years, we've been able to see the historical development of TV's Paradise from a simple mining camp to a frontier town to a scenic resort area.

It begins with my favorite TV Western:

'Maverick' - "The Cats Of Paradise" 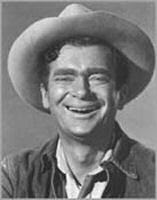 Bret gets involved [in] financing Modesty Blaine's plan to sell cats to a mining town to control the rat population. But when she leaves him holding an empty bag, Bret must face the wrath of a jealous but superstitious sheriff and a hired killer willing to put cash and duty ahead of friendship.

In this episode, there were a few buildings, but the citizens lived mostly in camps near their mining stakes. Paradise had a mayor and a murderous, superstitious sheriff named Scratch Madden (played by a surprisingly mean Buddy Ebsen).

'Guns Of Paradise'/'Paradise'
Gunfighter Ethan Cord, left to raise his dead sister's children, tries to settle down in the town of Paradise, but finds that his past continues to haunt him.

A few decades later, the town was thriving and becoming more civilized, but there were still signs of trouble. So it was a good thing the townsfolk had Ethan Cord there to help out. (Although a lot of that trouble came to town because of Cord.....) 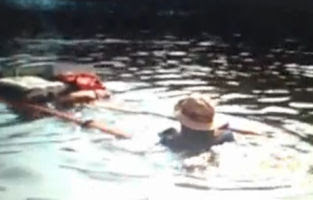 Quincy and Danny plan a simple fishing vacation in the town of Paradise. Then a case of mistaken identity drags Quincy into a closed murder case. The more Quincy digs, the more he realizes the case should never have been closed the way it was - and the more determined someone becomes to discourage the investigation. A new test that permits Quincy to tell the difference between male and female blood will confirm or deny the suspect's story, and maybe expose something worse...

Jumping ahead nearly a century, Paradise is now the tourist attraction where you can just go to relax and leave the city life behind. For everybody except Quincy, that is. (Rockford would have had trouble here too if he ever drove through. Some people just attract trouble.)

It would have been nice to include two other series in this collection, but their versions of Paradise lie elsewhere.....

'The Roy Rogers Show' - "Ride Of The Ranchers"
Every year, during Paradise Valley's Ride of the Ranchers, wealthy rancher Don Jose traditionally leads the ride. However, this year a gang of outlaws plans to attack Don Jose's ranch while he's away at the Ride, in order to take his strongbox which they believe is full of money.

'The Roy Rogers Show' - "Strangers"
Although Lanny Gaines and his ailing father have lived in Paradise Valley for several months, none of their neighbors has stopped by to introduce themselves. One day a group of surveyors arrives at his ranch and Lanny, overjoyed to finally have some company, takes them in. What he doesn't know is that the men are not surveyors but a gang of outlaws on the run from the law.

'Bat Masterson' - "The Price Of Paradise"
Bat arrives in Paradise, Colorado, to collect a gambling debt from a crooked casino owner who doesn't like to pay his debts. He also doesn't like to pay his taxes, going so far as to change the course of a river so his town would lie beyond the authority of the county tax assessor - until Bat accepts the appointment.

This would have been so perfect for the Toobworld version of Paradise, California, but alas! I'll hopefully get the chance to see this episode one day; it could be that these episode guides online have been perpetuating the wrong information all this time. We'll see.

But at any rate, we not only have three series to insure the qualification of Paradise, California, but 'Paradise'/'Guns Of Paradise' had a decent three year run to make the town a true contender.

And that was an enjoyable pairing! When I inducted the two of them into the Hall for July of 2002, (when I was inducting duos as a theme), I used a couple of publicity pics from that episode to represent them.