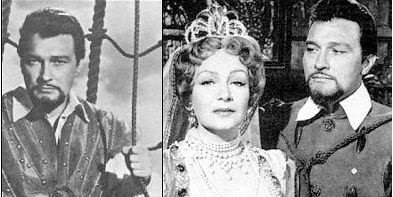 On this date in 1595, Sir Francis Drake died of dysentery and was buried outside of Portabello. On television, he had a TV series about his exploits in which he was portrayed by Terence Morgan. Even though most of the stories presented in the show were totally fictional, it would be Morgan's portrayal which would stand as the official Toobworld version of Drake. (Toobworld is biased towards those versions of historical figures who are played by the same actor for at least three episodes, and the first one out of the gate usually gets the nod to be the official standard bearer. Usually.)

Sir Francis Drake is pictured here with Queen Elizabeth I. Although Glenda Jackson gets the nod for her official portrayal in Toobworld, thanks to 'Elizabeth R', we can say this is her as well. The difference in the looks could be attributed to a variation in the makeup that was used to disguise her blemishes and ravages of age.

Better than saying this was yet another quantum leaper....

Labels: As Seen On TV, Recastaways, Splainin 2 Do, TV timeline

My best friend told me that last Saturday they had a movie on the Sci-Fi Channel titled The Immortal Voyage of Captain Drake featuring Adrian Paul as Sir Francis Drake.

Ahhhh! I saw the movie listed on the IMDb.com with not much more listed about it than who was in it and that it would be on TV in 2009! Well the timing was good, at least.