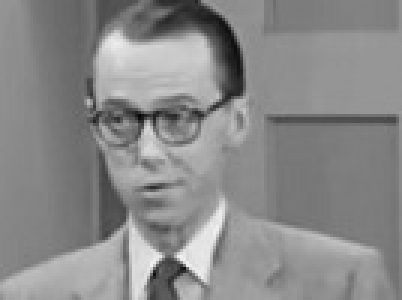 With this new feature of inducting new members into the Television Crossover Hall of Fame on Fridays, it’s not always going to be the inanimate objects like the recent new members Let’s Potato Chips, Heisler Beer, and the Los Angeles Chronicle.  There will be actual characters who would not exactly qualify without some splainin to do.  For instance, when we inducted Martin Lane from ‘The Patty Duke Show’ and its reunion movie many several decades later.  Those were the only two shows which officially qualified him, leaving him one short.  However, he was the managing editor of the New York Chronicle in all of its manifestations in other shows… just never named as such.  So we filled in the blanks.  It’s kind of like a birthday honors list entry but on a weekly basis.

And we have such a case for this Friday’s induction….

Olan Soule, one of the charter members in the "Hey, It's That Guy" Club, played a California court clerk in Los Angeles four times over the years in 'Perry Mason': 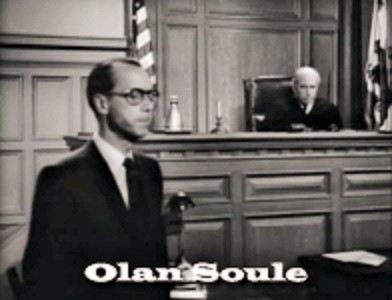 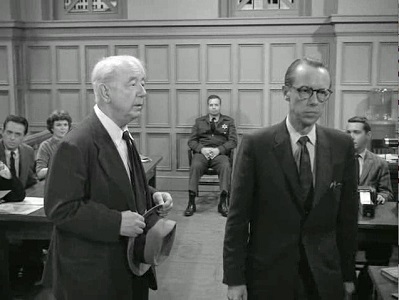 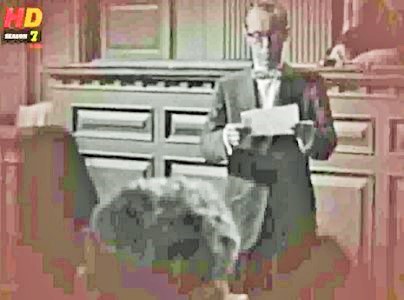 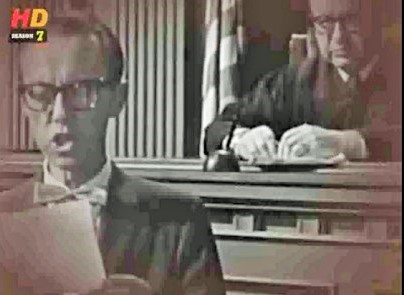 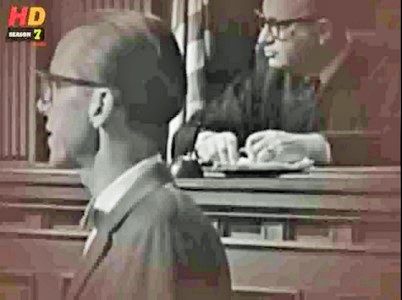 This may have been his most important showcase as that clerk – he had to make the official proclamation of the jury’s verdict, that Perry Mason’s client was guilty at the beginning of the episode.

“The Case of the Latent Lover” (1964)
He only has a short scene near the beginning of the episode, but it looks like the clerk was working exclusively for Judge Robert Alder by 1964. 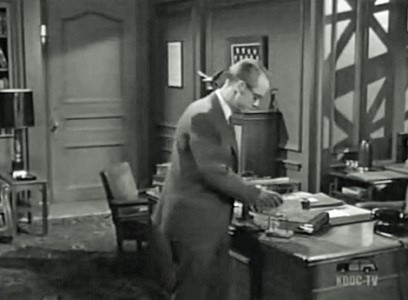 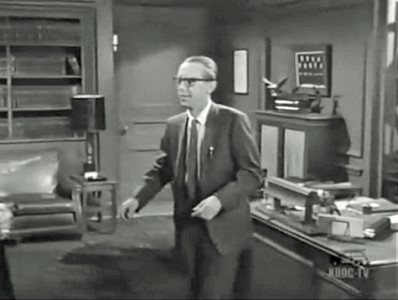 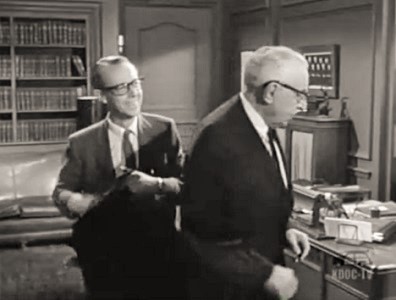 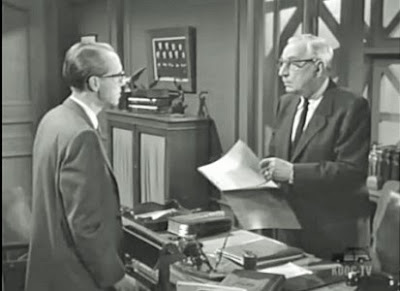 Olan Soule (as his character, natch!) held that job on other TV series as well.

'The Jack Benny Program'
- "Jack Arrested for Disturbing the Peace" (1960) 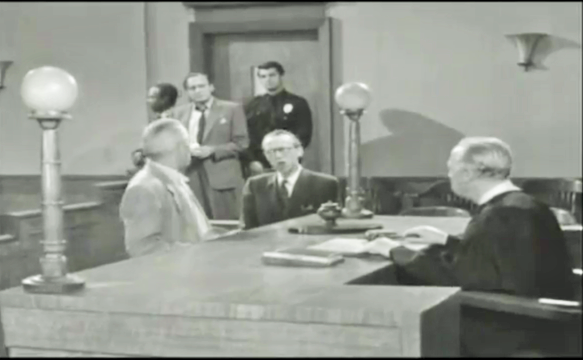 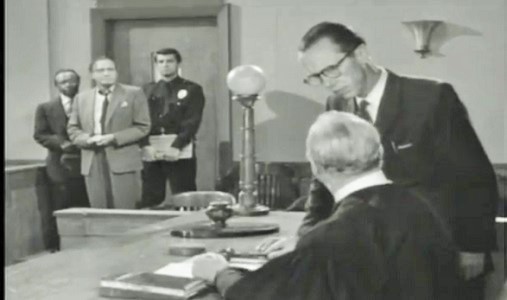 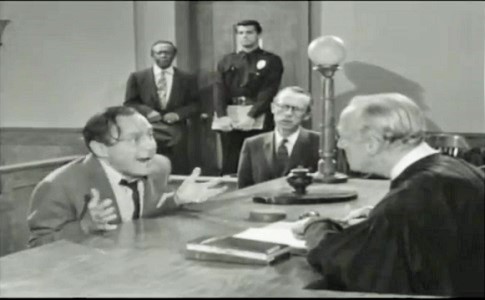 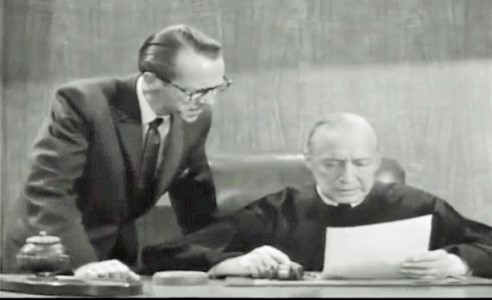 Jack keeps all of Beverly Hills awake with his violin playing and is arrested for disturbing the peace.

This is what I wrote about that episode for the “Make Room For Daddy Fans” page on Facebook: 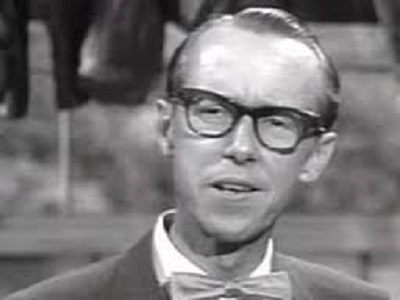 One of the guest stars in a small role was Olan Soule, usually seen as clerks and scientists. I have three roles of a court clerk to his credit which I'm going to one day claim were all the same guy. (Makes it even better that all three appearances were in the LA court system.) So I'm going to add this small bit to the batch - that his court clerk came to NYC on vacation in 1963 and took Jose's tour of the Williams' apartment. 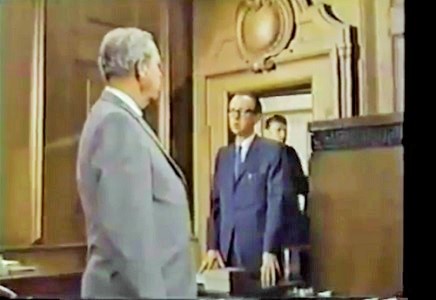 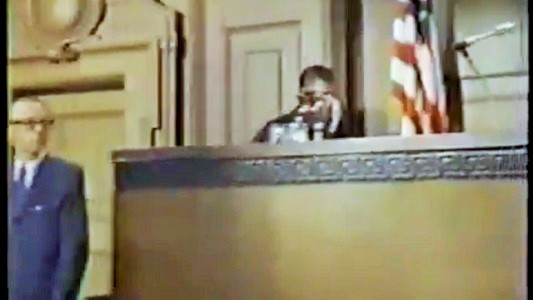 A stern Lucas County, California "letter of the law" judge is kidnapped and "sentenced" to death by a man he once sentenced to death.

(The IMDb claims that he was a bailiff in Judge Stimming's courtroom, but he wasn't wearing a bailiff's uniform and he went uncredited for the episode. Therefore, this is really just the opinion of the IMDb.

It also supposedly takes place in Lucas County, California.  The only Lucas County is in Ohio here in the real world.  This normally wouldn’t be a problem for Toobworld – we have plenty of fictional counties in “Telemerica”.  But I don’t think a clerk in Los Angeles County could hop over to another county to cover for a sick colleague or a clerk on vacation.  I’m going to just consider Lucas County as being a very small county covering a few of the LA suburbs.  But in name only – Los Angeles still controls much of Lucas County’s bureaucracy especially the judicial branch.)

I don’t know if Olan Soule had a name in mind for his court clerk, something to help him lock into the character, but for me, I’ll call him Clark. 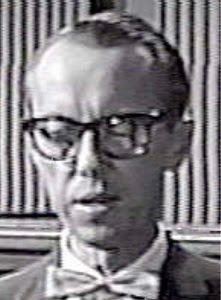 Clark is an English language surname, ultimately derived from the Latin clericus meaning "scribe", "secretary" or a scholar within a religious order, referring to someone who was educated. Clark evolved from "clerk". First records of the name are found in 12th-century England. The name has many variants.

I think it was in his genes to be some kind of clerk, handed down through the generations.  You should see how many hotel/motel clerks he played through the last couple of centuries as well as telegraph clerks in the wild, wild west!

At any rate, we are celebrating his Los Angeles court clerk today with membership in the TV Crossover Hall of Fame.  Welcome aboard, “Clark”!

The Hall is adjourned!