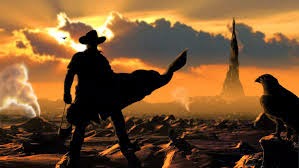 Hoping to forge a new franchise on both the big and little screens, Sony Pictures and MRC have teamed up to bring Stephen King's novel series "The Dark Tower" out of the fictional universe of BookWorld and into both the universes of the Cineverse and Toobworld.

It will begin with a movie adaptation of "The Gunslinger" which revolves around Roland Deschain and his search for the Dark Tower.  This will kick off a series of movies based on the novels, with MRC developing a complementary TV series (probably dealing with some of the ancillary characters in this sprawling epic.)

This sounds a lot like what ABC and Marvel has done with their TV series of 'Agents Of SHIELD' and 'Agent Carter' which both have sometimes tenuous ties to the big screen blockbusters about the Avengers, both individually and collectively.  It may turn out to be located in one of the Borderlands, but it's pozz'ble, just pozz'ble that it may at least launch from Earth Prime-Time into its own dimension.

No director has been chosen yet, which is what will happen before serious discussions of casting Roland and the other characters can begin.

(This is from an exclusive report at Deadline.)