'THE ROYALS'
"SWEET NOT LASTING"

In 'The West Wing', the alternative POTUS timeline seems to begin after Richard Nixon.  The line of succession can be traced back to at least General Owen Lassiter, who may have been the President around the same time as would have overlapped with Reagan and Bush 1 in the Trueniverse and Toobworld.

With 'The Royals', the timeline for that alternate TV dimension with a different royal family in Great Britain can be traced back about six centuries.  It may not even be the House of Windsor in power now.

This was confirmed by a painting of King Henry VI as a five year old, newly crowned as the monarch:

According to several friends with knowledge of costumes and fashion, that style of wardrobe would have been from the late 1700s, early 1800s.  Something straight outta Austen, perhaps. 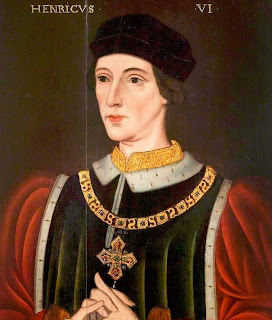 And this is the standard view of Henry VI, who would give his name to the trilogy of history plays by William Shakespeare:

Just think of all the fictional Kings and Queens that sat on the throne of that sceptered TV isle.  And with them would come so many changes to the history of that Toobworld.  We know of one example, from the same episode which featured the painting above: there was a great fire in London in 1822, which briefly threatened the palace.  (The only great fire I can find mentioned for 1822 happened in China.)

At some point in this first season run for 'The Royals', I'm hoping we'll see that world's version of the President of the United States.  But who knows?  America hasn't been mentioned yet in the series, so it's pozz'ble, just pozz'ble, that the USA doesn't even exist in such a radically altered timeline.  It could still be a British colony!