'The Bold Ones: The Senator'
"Some Day, They'll Elect a President"

As soon as Dan Farrell, editor of "Crime" magazine, arrived at his hotel in Washington, D.C., he was handed a subpoena compelling him to appear before a Senate sub-committee.  It was Senator Tucker who wanted Dan to be there, hoping to get him to name his sources for an article he wrote about rampant drug use among high school students in America.

But the proceedings were chaired by Senator McMichaels, whom Senator Tucker would call "Hank". 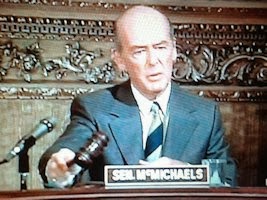 So the sub-committee chairman was probably named Henry McMichaels.

However, a year later, that same Senator was seen chatting away with fellow Senator Hayes Stowe and his aide de camp Jordan Boyle when he was asked to confer privately with a very powerful lobbyist.

I'm not sure if that lobbyist or even Senator Stowe referred to the other Senator by name, but the credits listed him as "Senator Stenberg". 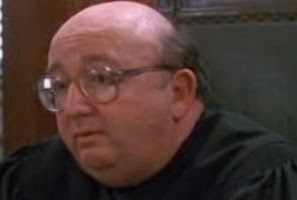 There are plenty of TV characters who look alike in Toobworld.  And some of them share the same occupation - see Judges Morris Torledsky and Arthur Cohen.  In their case, they were twin brothers who were adopted separately and raised by different families yet whose lives followed the same path.  It's not unheard of in the Real World.

But the idea of two United States Senators who were "identical cousins" seems highly unlikely, at least without being remarked upon.  How was that lobbyist to know he had the ear of Senator Stenberg and not that of Senator McMichaels without asking first?

If Senator Stenberg's name was never mentioned in that 'Bold Ones: The Senator' episode, then Toobworld Central will fall back on its usual method of dismissing what is revealed in end credit titles as being irrelevant to the story within Earth Prime-Time.

But if the lobbyist did mention it, then there's a splainin as to why there was a Senator Stenberg and a Senator McMichaels in office at the same time who looked alike (although one that is a bit of a stretch.)

They were the same man.

It's quite a mouthful.

"Stenberg" may seem like a very odd choice for a first name, but try telling that to FBI Agent Seeley Booth or to rancher Beeley Garrett of Centennial, Colorado.  Stenberg McMichaels follows their lead - his first name was an old family surname, perhaps his own mother's, given new life in the next generation as his first name.  It shows that the Senator was part Scottish and part Swedish.

I'm thinking he was the senior Senator from Minnesota, which has a large Swedish-American population.  (Glenn Morley would be the junior senator.)  That would provide a splainin as to why there was a heart surgeon in Roseberg, Minnesota, by the name of Dr. Walter Reed Richards who looked exactly like him - they shared either the same father or mother.  (Either the elder McMichaels cheated on his marriage or Mrs. McMichaels remarried after the untimely death of the senior Richards.)

So why would the lobbyist have called him Senator Stenberg? That's simple - nobody's perfect; he simply mis-spoke.  Happens to the best of us.  Fifty senators - that's a lot of names to keep straight......

Then again, perhaps it was done on purpose.  Perhaps Senator Stenberg H. McMichaels was known by the nickname of "Senator Stenberg".  There is precedence in the real world: Sam Irvin was known as "Senator Sam" and Michael Bloomberg of New York City was referred to as "Mayor Mike".

That's our splainin and we're sticking to it.

(Back in the 1950s, there was a Senator Brockton in the Los Angeles area, but he was a state senator.  He still could have been related, however....)

In case you couldn't tell by the title, these characters were all played by character actor Bill Quinn......

Labels: As Seen On TV, By Any Other Name, Double Vision, Game of the Name, Splainin 2 Do, Tele-Folks Directory, Theories of Relateeveety, TV Classique