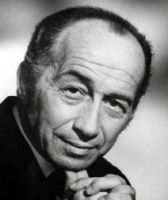 His name was Johnny Silver, and he was an actor whom you've seen in plenty of TV and movie roles, like in 'I Dream Of Jeannie', 'Night Gallery', 'Mannix', 'The FBI'.... He was Ludicrous in 'H.R. Pufnstuf', and he played Dr. Blinkey in that series as well. (He also played a guy named Blinky in 'The Munsters'. Hrmmm... I wonder if I could pull off a splainin for that connection....?)


Silver usually played small-time crooks, ordinary working men, race-track touts, and in the case of 'The Dick Van Dyke Show', a lot of waiters.
Not all of his waiter roles could be included if you wanted to combine them, because they were in TV shows that took place on both coasts. But if I stick close to home, here in NYC, at the very least I can make the case that all of his waiters on 'The Dick Van Dyke Show' were the same guy. And I think we can give them all the same name as well - Alfred Campbell.

Alfred and his wife used to live in Missouri, not far from Camp Crowder. There they ran a "B&B" known as Lakeview Lodge. (It was the type of place that would be considered a fancy hotel... in Hooterville, maybe.) It was there that Rob and Laura spent their honeymoon in the episode "Honeymoons Are For The Lucky".

That happened back in 1951, if my timeline for the series holds up. (I'm saving that for my last post of the day.) But at some point they must have sold off the property and then packed up to move to New York City.

There, Mrs. Campbell (played by one of the greatest character actresses of all time, Kathleen Freeman) got a job working as a maid for one of the swankiest hotels in Manhattan. We got to see her on the job in the episode "Never Bathe On Saturday"*, where once again she ran into Rob Petrie. 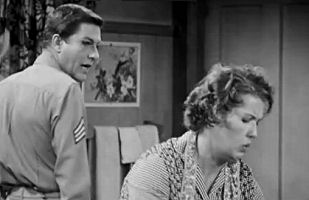 Over a decade had passed since she last saw Rob there at Lakeview Lodge, so it would be understandable that neither one of them remembered what the other looked like. (We should also take into account that both times we see her, it takes place in a flashback. So the interpretation of the audience for those stories - Buddy & Sally in the first story, Millie in the second one - have to be taken into consideration.)

Plus, Rob was wearing false eyelashes when she saw him back in Missouri; in Manhattan, he was penciling in a false mustache with a laundry pencil to make himself look more like David Niven. (Although I would think seeing him do that might have triggered her recognition of him as the guy with the glued-on false eyelashes, but what do I know?) 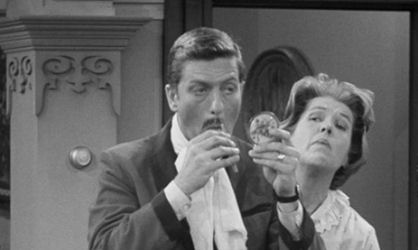 As for her husband Alfred, he wasn't so lucky in finding steady work. Taking a variety of jobs as a waiter around town, and even as a counter man and a delivery guy:

(The episodes are placed in their general order on the Toobworld timeline, which is why "Honeymoons Are For The Lucky" is placed first.)

As you can see, at one point he got to work at the same hotel as his wife.

Other roles played by Johnny Silver on the show, one named Dave and the other Nick, would be different individuals who just happened to bear a similarity in appearance to Alfred Campbell. The photographer he played in two different episodes ("The Cat Burglar" [2 January 1963] and "One Hundred Terrible Hours" [5 May 1965]) should also be considered a different character, or characters. If they were the same photographer, he also made the move to New York City, but from the Danville, Illinois, area rather than from Missouri (as "One Hundred Terrible Hours" was a flashback to early 1953.)

By combining these characters, I'm just trying to keep Toobworld tidy, and it builds up Johnny Silver's combined character into a more prominent member of the Tele-Folks Directory......

The New Rochelle Police also dragged Alfred in for a lineup where he, in an apparent attempt to break the tension, cracked a take-off on a "To Tell the Truth" phrase:

"MY name is "Robert Petrie!"