Just in time for Black History Month, this YouTube video mash-up between 'Friends' and - is it 'Sealab 2020'? - a cartoon provides a rap song about the egregious lack of color in the entire history of the sitcom 'Friends'.....

That computer did a pretty good job of analyzing the content of the series and extracting every example of a black person on 'Friends', didn't it?

They forgot a character who, for me, was the most important black character in the whole history of 'Friends': 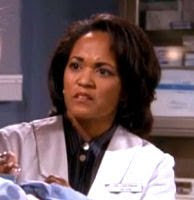 And why is she so important to me? Because the actress who played that role is my twin sister!

Well, okay. Not exactly, but she's one of my dearest friends, Shirley Jordan. Shirley is an actress who has garnered a lot of supporting roles in Toobworld over the years - among them 'ER', 'Shark', 'Better Off Ted', 'Desperate Housewives', 'Strong Medicine', and 'Boston Legal' & 'Ally McBeal'. (I combined those two characters into one.) Last year she was in "Munched", an acclaimed play in the Los Angeles area, and has an upcoming role in an episode of 'Friends With Benefits'.

I was able to combine all of her nameless medical roles into two characters who happened to be sisters. I'm even thinking she should receive the Birthday Honors List induction into the TV Crossover Hall of Fame. (I'm already in there myself, and I could use the company. Everybody else shuns me......) 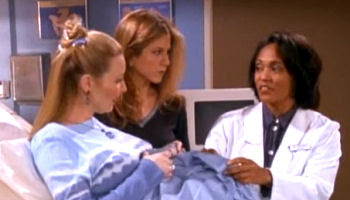 So I just wanted to set the record straight and make sure Shirley Jordan got her due as a black person on 'Friends'.......
BCnU!
Posted by Toby O'B at 1:30 AM