HANGING OUT THE SHINGLE IN TWO DIMENSIONS 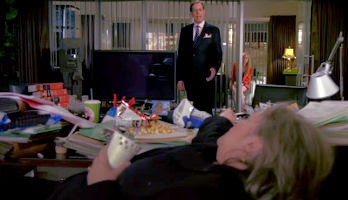 I've added 'Harry's Law' to my DVR queue on Monday nights, probably the most over-packed night of programming for Toobworld Central. But I'm a big fan of the David E. Kelley style of quirk and so far I'm enjoying what 'Harry's Law' is contributing to the televersion of Cincinnati.

The series is only two episodes old, but did you know it already exists in an alternate TV dimension?

First, take a look at this overview of the series, provided by NBC:

In the pilot episode that was aired, the opening scene - with Harry getting fired from a high-profile law firm where she dealt in patent law - featured voice-over narration by Harriet Korn. Later, she worked with the nerdy young lawyer who struck her down with his car. Adam Branch was played by Nate Corddry.

You don't find that in the alternate TV dimension.....

Right off the bat, the most notable difference missing from the pilot that was aired is the Woody Woodpecker cartoon. Instead we got a clip from a Bugs Bunny/Yosemite Sam cartoon. (Maybe 'Harry's Law' is a Warner Brothers production?)

But there were two key casting changes as well. Adam Branch started out as an older British lawyer, played by Ben Chaplin. The word on him being dropped was that it wasn't a good fit between the actor and the character. 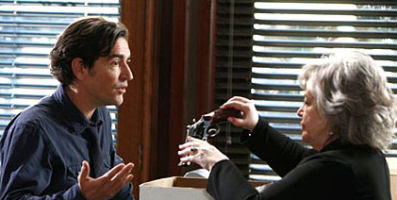 And Harry's boss at the old law firm was changed too, most noticeably follicle-wise. I have no clue who that actor was playing the role originally, but Ivar Brogger is the official version now in the main Toobworld. 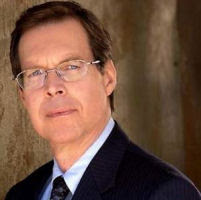