AS SEEN ON TV: HOSNI MUBARAK

Gee, for some reason, this guy seems to be on TV a lot lately the last two weeks. So the "As Seen On TV" showcase decided to jump on the bandwagon..... 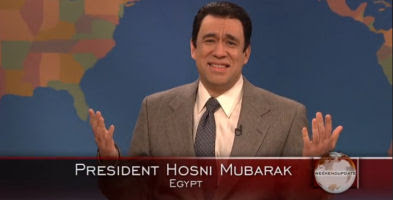 AS PLAYED BY:
Fred Armisen

By Clare Youell, for CNN
February 2, 2011
(CNN) -- Egypt's embattled President Hosni Mubarak addressed the nation for a second time Tuesday, declaring his intention not to seek re-election in September amid mass protests calling for his immediate resignation.

"It is not in my nature to give up responsibility. My first responsibility now is to restore the security and stability of the homeland," Mubarak said.

However the world's media has reported that his decision is not enough for most demonstrators, who fear that his legacy will continue through his potential successor -- former intelligence chief, Omar Suleiman.

Mubarak is on his way out, but the regime is still very much in power, says Britain's Guardian newspaper. Egypt's survival plan, it says, centers on Suleiman, also a close confident of Mubarak, who was recently been appointed vice-president.

Labels: As Seen On TV, Skitlandia, Special Guest Appearance, Twipped from the Headlines