AS SEEN ON TV: HELEN OF SPARTA 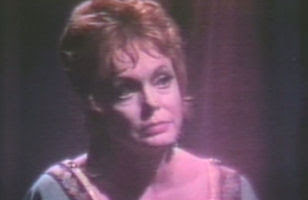 AS PLAYED BY:
Nancy Coleman

Although we know her better today as Helen of Troy, during the "news" broadcast, she was identified as Helen of Sparta, which was the city-state of her birth.

That's some, erm, interesting casting for a woman who was probably about 30 at the time of the fall of Troy...

I got the feeling from the dialogue that the war had dragged on for years by that point. And considering life expectancy back then, she was probably at best thirty in that pic!

Wow- the short term memory is shorting out!

What I meant to say instead of parroting your comment, was that the ravages of the war - and time - were probably the cause for her to look so old. But also that thirty was probably late middle age to them.

It's complicated. If one assumes typical Bronze Age life patterns, Helen would have married at 13 (having been abducted by Theseus at the age of 12 so presumably having hit puberty by that point). It's generally considered she had her daughter Hermione not long afterwards and that Hermione was no older than 7 or 8 when Paris came a-visiting. So that would place her in early 20s, probably 21-22.

The Iliad is set during the 9th year of the Trojan War, so Helen would have to be 30 or 31. A queen of Sparta, who would have been pampered to hell, given the best of everything, wouldn't have had to work (she has many servants, even in Troy) so it's likely she would have aged better than someone nowadays!

If one also considers that she's supposed to be Zeus's daughter and therefore supernaturally beautiful, and that at various points in The Iliad, Helen's continuing beauty is referenced (Trojans and Greeks look at her and can understand because of her beauty why the war is being fought; Aphrodite also threatens to take away Helen's beauty, which is her only defence against being killed by both Trojans and Greeks, if she doesn't do as she's told), Helen should really look a little less, erm, tired.

Indeed, if you go by The Odyssey's version of things (rather than Euripedes' various twists on things), Helen is happily ensconced back in Sparta another eight years later - so when she's 38 or 39 - and is still supposed to be incredibly beautiful when Telemachus goes visiting her.

And if that's not enough, according to some of the other poems that make up the Great Cycle, Menelaus is all for killing her when he catches up with her in year 10 of the Trojan War, but when her top falls off (seriously), he catches one look at her breasts and decides not to kill her. So they'd have to be pretty spectacular still at that point. That's all I'm saying. ;-)

She's also supposed to be blonde according to The Odyssey, but hey ho.

I forgot I'm dealing with the Greek scholar. LOL

Well, 'You Are There' was a joint production (I think) between CBS entertainment and news. Not that that's any indication of historical accuracy. She just may have been the best actress available on the New York theatre scene at the time. And as it's Toobworld reality, especially in a production where Walter Cronkite - the most trusted man in America at the time - says all things are as they were then, except "You Are There".... I'll go with the looking older than her actual age reasoning.....