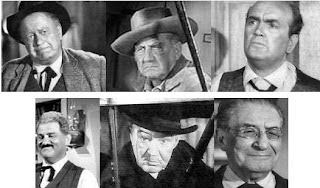 While visiting a website dedicated to the old Western series 'The Rifleman', I learned that at least six different actors appeared on the program as Doc Burrage, supposedly the town of North Fork's only medico.

At least three of the actors playing the role may be familiar to you, dear reader. At least I recognized three, but then I delve into this stuff more than you might. (For me, it's Numbers One [Edgar Buchanan], Three [Rhys Williams], and Four [Jack Kruschen]).)

The other three official Doc Burrages were played by Robert Burton, Ralph Moody, and Fay Roope. (Two other men showed up as a doctor in that series, but whether or not they were playing Doc Burrage, or some other resident sawbones in town, I don't know.)

At any rate, the actors all look too different from each other for there to ever be any kind of splainin that might keep them all being the same man. I don't think he's a Gallifreyan Doctor - especially not the one we know! - so the theory of Time Lord regeneration is out. Besides, the residents of North Fork would surely have noticed and commented about it in one episode or another.

So I'm leaning toward leaping. As in 'Quantum Leap'.

We know that the concept of leaping outlasts Dr. Sam Beckett. We saw in several episodes of 'Quantum Leap' that other leapers from his future were jumping into the same timelines he was in and futzing with his missions.

So it's pozz'ble, just pozz'ble, that leaping technology can now take a person back farther than their own lifetime, much farther. (Actually we've seen that it can - on 'The 4400'.)

It could be that the first Doc Burrage, as played by Edgar Buchanan, is the true Doc Burrage, and all those who followed are various leapers from the future.

It must have been some important project for all of those men to get involved in the life of Doc Burrage. He must have proven to be somebody vital to the needs of the Futurekind and so they leapt into his life to make sure certain actions were taken. Perhaps they utilized some medical technique unknown in the 19th Century to ensure one of his patients survived to live out the destiny planned for him/her.

And because this would all be based on leaper technology from the Future, nobody else in North Fork ever noticed that Doc Burrage no longer looked like the original. They would all see a character played by Edgar Buchanan, while we saw the actor currently playing the role.

(Of course, if there's an episode where one of those other Doc Burrages looks into a mirror and doesn't see Edgar Buchanan looking back at him, well my theory gets REALLY shaky!)

I'd like to think they were all there to make sure that Mark McCain grew up to follow his destiny in Hollywood. We saw that happen in the fourth "Gambler" movie, "The Luck Of The Draw" - Mark was working on a movie shoot in California when he was called in at the last second to play the lead. (For Toobworld, it was a fictional portrayal of a "real life" Western legend - the Lone Ranger!)

Since the writers' strike began, I've been giving some thought to how the WGA might be portrayed in Toobworld. Plenty of TV shows have given us writers of fictional TV shows, and I'm sure all of them were members in good standing in the Guild.

But wouldn't it be something if an elderly Mark McCain had been one of the founding fathers of the WGA's televersion?

Why that would be important to the shapers of the Future, ya got me.
It certainly begs the question, "What's up, Docs?"
Sorry about that, Chief.....

[My thanks to the Cowgirl for the pictures I rustled. If you like those old Western TV shows like I do, you'll love her site - lots of great stuff!]

Gee, I hope you didn't strain yourself too hard to get that pun in your title!

I would have gone with "A Barrage Of Burrages".

But as always, a lot of fun speculation as to why a character changes appearance due to recasting.