'THE LIFE AND LEGEND OF WYATT EARP'
"WYATT'S LOVE AFFAIR" 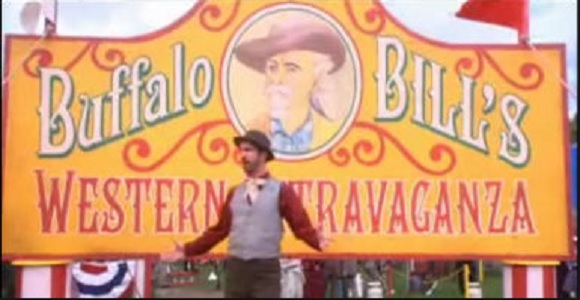 Earp must have known something the rest of the country didn't.  He was in Dodge City from 1876 to 1879 before moving on to Las Vegas, New Mexico, and then Tombstone.

But the first wild west show wasn't formed until 1883, begun by Buffalo Bill Cody.  Maybe Cody had it in the planning stages for years before that.  And if so, perhaps he told Earp about it (if they ever met.)  Maybe that scenario didn't happen in the real world, but it's pozz'ble, just pozz'ble in Toobworld.

Citing Occam's Razor, that splainin is the simplest and that's the one we'll stick with.  Better than trying to get my audience to believe the televersion of Wyatt Earp had the power of Sight, or that he traveled into the future with someone like the Doctor.....

O'BSERVATION:
The picture is from an episode of 'The Murdoch Mysteries'.

Isn't Occam's Razor just to accept that the character meant Dodge City was seen as a diversion that illustrated the elements of the wild west?

As Muskie Muskrat would say, It's pozz'ble, just pozz'ble.