"HAPPY ENDINGS" FOR "GAME OF THRONES" 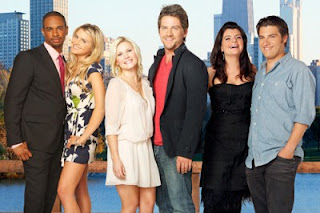 
Brad: Alex and Jane tried being honest with each other like 20 years ago. The fight lasted for weeks. The family calls it "the incident."

When Brad found out that Max had "screwed the pooch" and told both of the Kerkevitch sisters all the smack they had been talking about each other behind their backs, he knew a Serbian bleep-storm* would be unleashed.

Brad: People are going to get hurt.  Family members will be forced to take sides.  Innocent Brads yelled at and denied sex for weeks!  Winter is coming......

Now, "winter is coming" on its own is just a sentence and doesn't have to infer any connection to the George R.R. Martin opus fantasy epic "A Song of Ice And Fire", now being adapted for HBO as 'Game of Thrones'.  Thus, Zonk averted.

However, we know the books do exist in Toobworld, thanks first to 'Chuck' Bartowski as he read about the dire-wolves given to the Stark siblings.  Since then, the actual TV show - set in the dimension of Earth Prime-Time but on the planet Mondas before Toobworld was populated with humans - has been mentioned in the following TV series in the main Toobworld:
(It's also been mentioned on several shows set in the Tooniverse and in Skitlandia, as well as in the alternate dimension of 'Castle'.  And that means the "Derek Storm"/"Nikki Heat" author of the main Toobworld probably mentioned it as well.)

So Toobworld Central has no fear of accepting Brad's quote for what it is - a reference to the brainchild of Mr. Martin.  That would cause a massive Zonk if it weren't for the fact we already have a splainin in place.  And if a certain rumor about the show's fourth season hold true, we'll have a new and more interesting splainin to replace it.

*I'd much rather have used the original word for the alliteration, but I try to run a clean TV site here.....