AS SEEN ON TV: GEORGE VI

A movie about King George VI of the United Kingdom and his battle to overcome his stuttering affliction is currently playing in theatres. And it looks as though "The King's Speech" will be nominated for several major Academy Awards next year....... 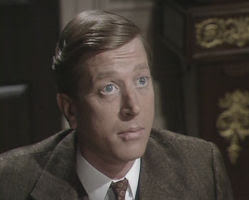 KING GEORGE VI
AS SEEN IN:
'Edward And Mrs. Simpson'

AS PLAYED BY:
Andrew Ray

From Wikipedia:
George VI (Albert Frederick Arthur George; 14 December 1895 – 6 February 1952) was King of the United Kingdom and the Dominions of the British Commonwealth from 11 December 1936 until his death. He was also the last Emperor of India (until 22 June 1948), the last King of Ireland (until 18 April 1949), and the first Head of the Commonwealth.

As the second son of King George V, he was not expected to inherit the throne and spent his early life in the shadow of his elder brother, Edward. He served in the Royal Navy during World War I, and after the war took on the usual round of public engagements. He married Lady Elizabeth Bowes-Lyon in 1923, and they had two daughters, Elizabeth (who succeeded him as Queen Elizabeth II) and Margaret.

George's elder brother ascended the throne as Edward VIII on the death of their father in 1936. However, less than a year later Edward revealed his desire to marry the American socialite Wallis Simpson. British Prime Minister Stanley Baldwin advised Edward that, for political and religious reasons, he would not be able to remain king if he married Simpson, who was twice divorced. So Edward abdicated in order to marry, and George VI ascended the throne as the third monarch of the House of Windsor.
BCnU!
Posted by Toby O'B at 12:06 AM