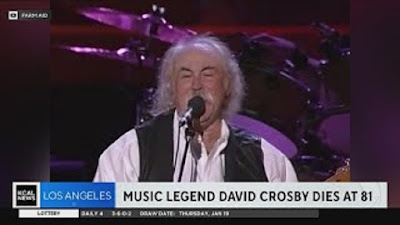 From CNN:
David Crosby, a folk rock pioneer and one of the founding members of The Byrds and Crosby, Stills, Nash & Young, has died, his family announced Thursday.

“It is with great sadness after a long illness, that our beloved David (Croz) Crosby has passed away. He was lovingly surrounded by his wife and soulmate Jan and son Django,” the Crosby family said in a statement, obtained by CNN through a family spokesperson. “Although he is no longer here with us, his humanity and kind soul will continue to guide and inspire us. His legacy will continue to live on through his legendary music.”

Representatives for Crosby had no comment when reached by CNN.

Crosby was inducted into the Rock and Roll Hall of Fame with the Byrds in 1991 and again with Crosby, Stills & Nash in 1997, alongside Stephen Stills and Graham Nash.

“Peace, love, and harmony to all who knew David and those he touched,” the statement added. “We will miss him dearly.” 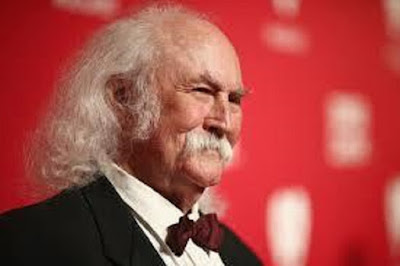 From Wikipedia:
David Van Cortlandt Crosby (August 14, 1941 – January 18, 2023) was an American singer, guitarist, and songwriter. In addition to his solo career, he was a founding member of both the Byrds and Crosby, Stills & Nash. 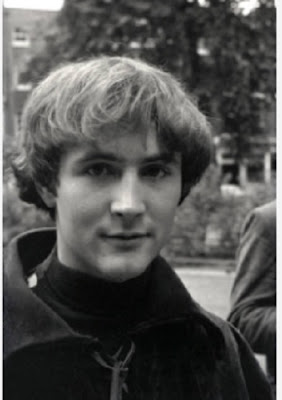 Crosby joined the Byrds in 1964. They had their first number-one hit in April 1965 with a cover of "Mr. Tambourine Man" by Bob Dylan. Crosby appeared on the Byrds' first five albums and produced the original lineup's 1973 reunion album. He subsequently formed Crosby, Stills & Nash in 1968 with Stephen Stills and Graham Nash. 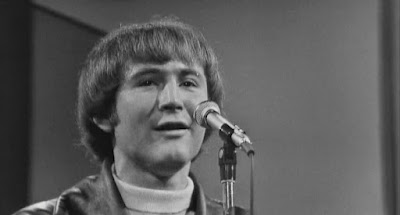 After the release of their debut album, CSN won the Grammy Award for Best New Artist of 1969. Neil Young joined the group for live appearances, their second concert being Woodstock, before recording their second album Déjà Vu. Meant to be a group that could collaborate freely, Crosby & Nash recorded three gold albums in the 1970s, while the core trio of CSN remained active from 1976 until 2016. Crosby, Stills, Nash & Young (CSNY) reunions took place in each decade from the 1970s through the 2000s. 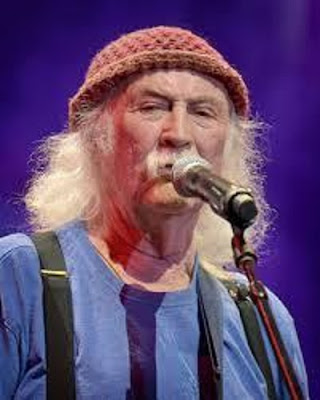 Songs Crosby wrote or co-wrote include "Lady Friend", "Everybody's Been Burned", "Why", and "Eight Miles High" with the Byrds and "Guinnevere", "Wooden Ships", "Shadow Captain", and "In My Dreams" with Crosby, Stills & Nash. He wrote "Almost Cut My Hair" and the title track "Déjà Vu" for CSNY's 1970 album of the same name. He is known for having employed alternative guitar tunings and jazz influences. He released six solo albums, five of which charted.
Additionally, he formed a jazz-influenced trio with his son James Raymond and guitarist Jeff Pevar in CPR. Crosby's work with the Byrds and CSNY has sold over 35 million albums. 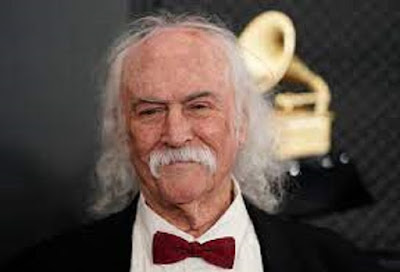 Crosby was inducted into the Rock and Roll Hall of Fame twice: once for his work in the Byrds and again for his work with CSN. Five albums to which he contributed are included in Rolling Stone's list of "The 500 Greatest Albums of All Time", three with the Byrds and two with CSN(Y). He was outspoken politically and was sometimes depicted as emblematic of the counterculture of the 1960s. 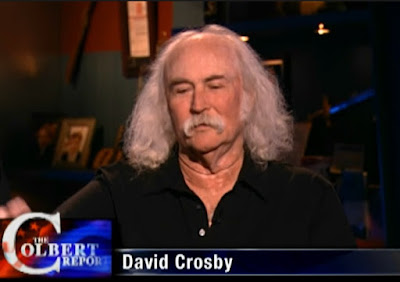 DAVID CROSBY
Crosby is being inducted now into the Television Crossover Hall of Fame as a member of the League of Themselves, and a multidimensional one at that.  Unlike many other musicians who have joined the Hall, he is not only known as playing himself.  On some series he played other characters, including ‘Flying Blind’ (Employer #4), ‘The John Larroquette Show’ (Chester), ‘Roseanne’ (Duke), and ‘Shannon’s Deal’ (Dorsey Ledbetter). 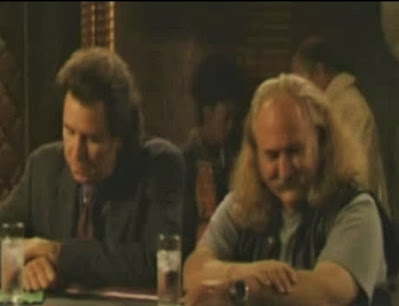 It could be suggested that those characters purposefully chose to pattern their own appearances so that they better resembled the televersion of the iconic rocker.  Therefore, one might argue that in their own way, those characters serve as ancillary buttresses to Crosby’s presence in Earth Prime-Time.
But I’m not going to push it.

Here are the shows which cemented Crosby’s membership in the TVXOHOF…. 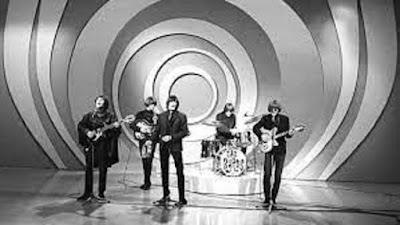 O’Bservation – ‘The Ed Sullivan Show’ has a fictional televersion which was inducted into the Hall of Fame at the same time as Ed Sullivan.  Usually variety shows don’t figure into the TVXOHOF tallies for qualification. 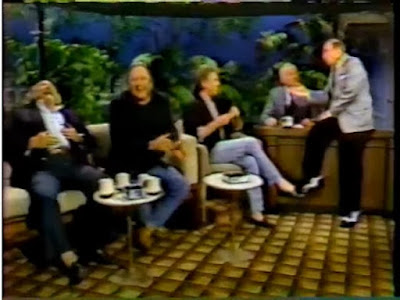 O’Bservation – ‘The Tonight Show’ has a fictional televersion.  Usually talk shows don’t figure into the TVXOHOF tallies for qualification.

On Ellen's 35th birthday, she and the gang go to the rock 'n roll music camp in Hollywood where they get to jam in a band with David Crosby, Aaron Neville, Queen Latifah, Bonnie Raitt, and the ubiquitous Sheryl Crow. But Ellen gets cold feet when she feels her singing can't compare with theirs. 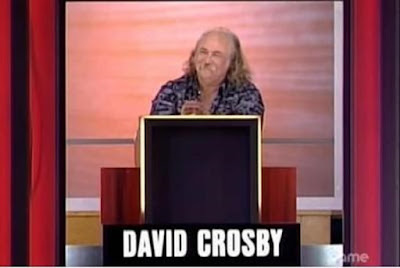 From Classic Rock and Culture:
For one week in 1998, David Crosby set up shop in one of the illuminated boxes of 'Hollywood Squares.' Host Tom Bergeron made no secret of his excitement in having Crosby on the show, at one point taking a moment to declare his fandom. “It’s a pleasure to have you here, David, it really is. I’ve loved your music for years,” Bergeron joyfully explained. “Not only have your musical achievements been incredible, but in one year, you lost a liver, you gained a liver, you became a father twice and became a grandfather. Any plans to top that?” After enjoying a laugh, the rocker replied, “Starting a new band. That’s the only way I could top it,” referring to his new group CPR. 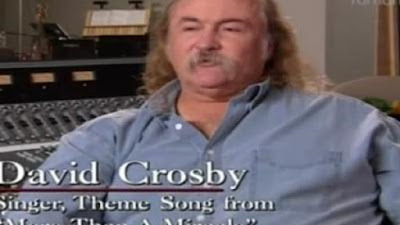 O'Bservation - David Crosby was the singer of the theme song for the fictional CBS TV series ‘More Than A Miracle’ and was interviewed by the televersion of ‘Entertainment Tonight’ upon the death of the star of that show.  Besides Crosby's cameo, the episode includes appearances by Victoria Principal, Bob Goen, Los Angeles Dodgers first baseman Eric Karros and CBS president Leslie Moonves, who used to be an actor. 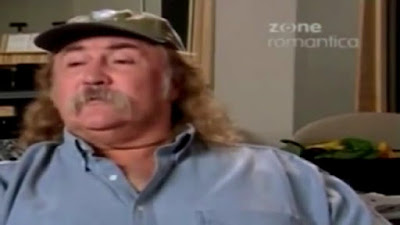 From the Paley Center:
This episode is a parody in which "Entertainment Tonight," hosted by Bob Goen, reports on a scandalous event at the hospital involving a famous TV star. Wendy Walsh explains that she was filming a puff piece about Todd Landers, the star of "More Than a Miracle," on which he plays an angel who comes to Earth every week and performs miracles and acts of redemption. When he slips and injures his back onset, he is brought to Chicago Hope in tremendous pain, and many people are excited to see the famous actor. Watters is unimpressed, but he allows "ET" to bring its cameras inside.

Grad comments on her fondness for the show, particularly Todd's oft-showcased posterior. Amid dramatic pleas for pain medication, Todd demands a Harvard-educated doctor, and McNeil attempts to diagnose his injury as Yeats administers Demerol and Watters monitors the reporters seeking an update. Suddenly, Todd codes and despite their attempts to revive him, is pronounced dead.

O'Bservation - It turned out that the actor had silicone implants in his butt cheeks which he never told anyone about.  One of them ruptured when he fell during the stunt.  The injection caused the leak to spread into his bloodstream.

Elsewhere, Hancock is dismayed to learn that the man atop the transplant list, Jerry Peru, is a former pimp. Jerry talks about his love of "More Than a Miracle" and its effect on his life, and he receives Todd's liver to replace his own alcohol-ravaged one. "ET" reports on the actor's death and CBS head honcho Les Moonves weighs in.

Jerry decides to turn his life around as a result of receiving the famous organ, and Shutt recalls an ironic episode of "Miracle" in which Todd's character miraculously returned from the dead.

At the funeral, Jerry sings "Amazing Grace" at the service, where David Crosby discovers him and helps him land a record deal. 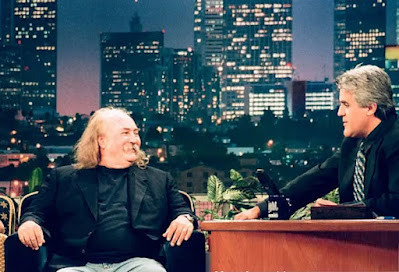 O'Bservation - As of now, the version of 'The Tonight Show' which is enshrined in the TVXOHOF is the one hosted by Johnny Carson, which featured the glory days of guest stars.  But I'm including these two episodes in Crosby's tally because Jay Leno is also a member due to the League of Themselves.

As for David Crosby's multidimensional doppelgangers on other TV worlds....

O'Bservation - This is the Toobworld where the League of Themselves televersions of celebrities cannot be reconciled with the original incarnations on Earth Prime (The Real World), but otherwise, that Earth is exactly like ours. Most times only an episode has to be excised and relegated to this doppelganger Toobworld, but sometimes entire series have to be banished.

Other examples include the full series of 'The Drew Carey Show' (worked as an office drone), the "Die Fast, Die Furious" episode of 'Las Vegas' (in which Jean-Claude Van Damme died), "Wish List", an episode of 'Suddenly, Susan' (in which Jerry Springer married a fictional character), and the "Nice Work If You Can Get It" episode of 'Cybill' (in which Dick Van Patten died). 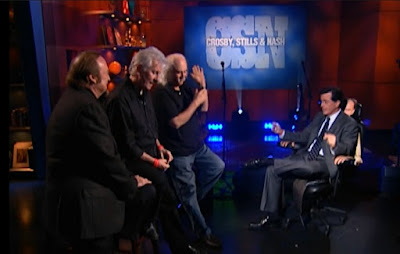 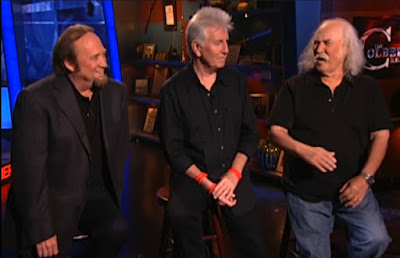 THE COLBERT REPORT (2008)
(with Stephen Stills and Graham Nash)

O'Bservation - I included this appearance since the program was hosted by Stephen Colbert as a right-wing talk show host, not as his real self. 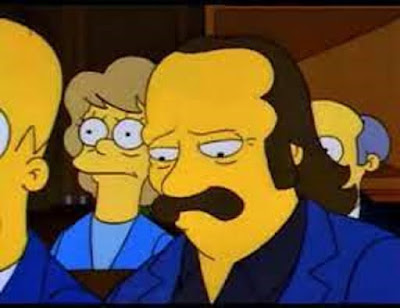 A misunderstanding leads to Marge being imprisoned for shoplifting, with her absence soon descending the family, and eventually, the town into chaos.

A wave of Osaka Flu, brought on by imported Japanese orange juicers, spreads throughout Springfield. It soon affects the entire Simpson family with the exception of Marge. Harried from being pulled left and right, Marge goes to the Kwik-E-Mart to buy some things, but accidentally puts a bottle of bourbon in her coat pocket, and forgets to pay for it.

Marge is then arrested for shoplifting, and is represented in court by Lionel Hutz. Naturally, his incompetence leads to her conviction and sentence of 30 days in prison.

O’Bservation – David Crosby was present in the courtroom. 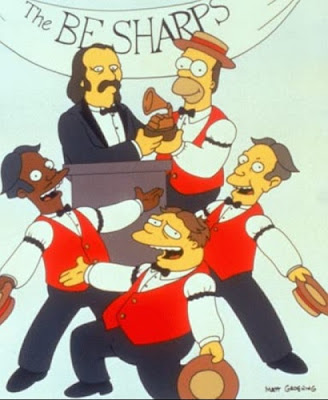 HOMER'S BARBERSHOP QUARTET (1993)
After the kids find a record with Homer's picture on it, he recalls the story of how he achieved fame in the 1980s with his barbershop quartet, The Be Sharps.

While shopping at the Springfield Swap Meet, Bart comes across an old LP with the faces of Homer, Principal Skinner, Barney, and Apu on it, as a group called "The Be Sharps." Homer proceeds to tell the story of how he and three friends formed a barbershop quartet in 1985, in a tale that echoes the saga of a certain British rock group from the 1960s.

After replacing Chief Wiggum with Barney Gumble, the group skyrocketed to fame with a catchy (and timely) ditty called "Baby on Board." However, their glory proves to be fleeting, as the band is threatened by divisions (mainly Barney's Japanese artist girlfriend) and eventually breaks up. 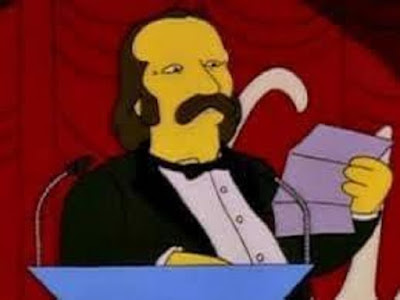 O’Bservation – Crosby was the presenter when the Be Sharps won a major award.
SKITLANDIA

O’Bservation – Crosby never appeared on ‘Saturday Night Live’ which has its own televersion, but he was portrayed in several sketches which exist in their own dimension.  He was played by Jon Lovitz, Horatio Sanz, and Bobby Moynihan. 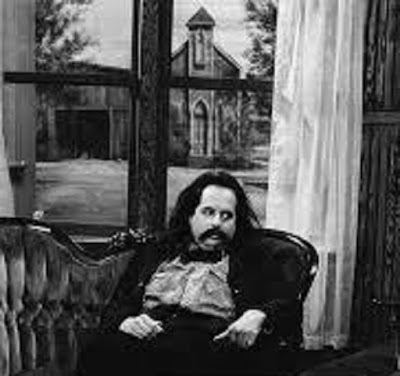 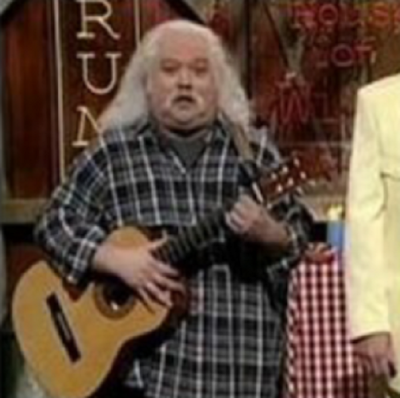 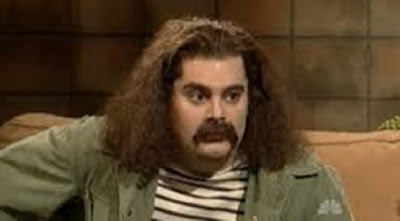 From the ‘Saturday Night Wiki’:
[David Crosby] has been impersonated by several cast members of SNL, but most recently by Bobby Moynihan on January 10, 2009 (Frost/Other People), and on February 27, 2010 (We Are the World).

Welcome.  I'm sorry it was under these circumstances…. 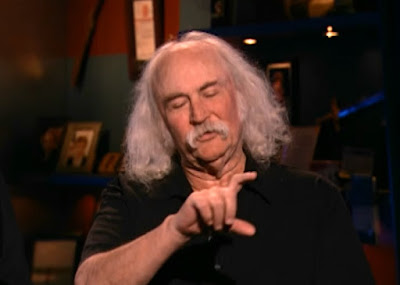 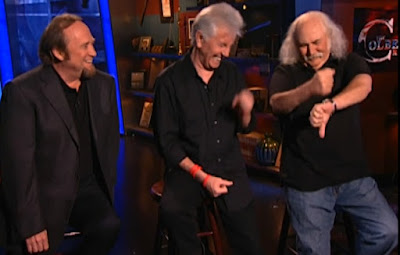