I thought (foolishly) that we might be able to sneak out of 2021 without adding any more memorial inductions into the Television Crossover Hall of Fame. 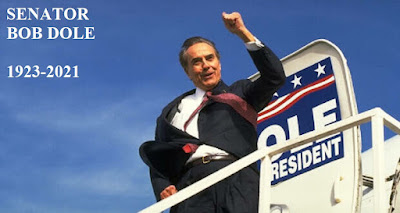 From CNN:
(CNN) - Bob Dole, a Republican Party stalwart and presidential hopeful who espoused a brand of plain-spoken conservativism as one of Washington's most recognizable political figures throughout the latter half of the 20th century, died Sunday.

"Senator Robert Joseph Dole died early this morning in his sleep. At his death, at age 98, he had served the United States of America faithfully for 79 years," according to a statement from his family.  He had announced in February that he was being treated for advanced lung cancer. President Joe Biden visited Dole shortly after learning of the diagnosis.

Dole, who was seriously wounded during World War II, had suffered a series of health ailments in previous years. In 1991, he received surgery for prostate cancer, received abdominal aortic aneurysm surgery in 2001, was hospitalized in 2005 after a fall in his home and was treated for a leg infection in 2009. 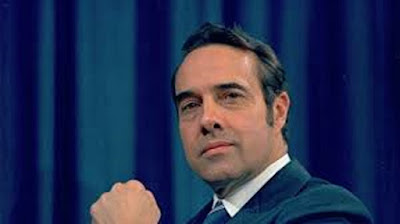 SENATOR BOB DOLE
From Wikipedia:
Robert Joseph Dole (July 22, 1923 – December 5, 2021) was an American politician and attorney who represented Kansas in the United States Senate from 1969 to 1996. He was the Republican Leader of the United States Senate during the final 11 years of his tenure, including three nonconsecutive years as Senate Majority Leader. Prior to his 27 years in the Senate, he served in the United States House of Representatives from 1961 to 1969. Dole was also the Republican presidential nominee in the 1996 election and the vice presidential nominee in the 1976 election. 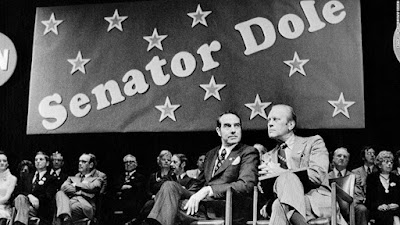 President Gerald Ford chose Dole as his running mate in the 1976 election after Vice President Nelson Rockefeller withdrew from seeking a full term. Ford was defeated by Democrat Jimmy Carter in the general election. Dole sought the Republican presidential nomination in 1980, but quickly dropped out of the race. He experienced more success in the 1988 Republican primaries but was defeated by Vice President George H. W. Bush. Dole won the Republican nomination in 1996 and selected Jack Kemp as his running mate. The Republican ticket lost in the general election to Clinton, making Dole the first unsuccessful major party nominee for both president and vice president. He resigned from the Senate during the 1996 campaign and did not seek public office again after the election. 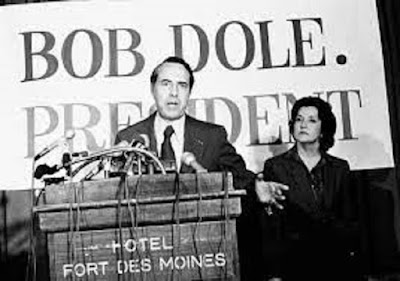 Dole remained active after retiring from public office. He appeared in numerous commercials and television programs and served on various councils. In 2012, Dole unsuccessfully advocated Senate ratification of the Convention on the Rights of Persons with Disabilities. He initially supported Jeb Bush in the 2016 Republican primaries, but later became the only former Republican presidential nominee to endorse Donald Trump in the general election. Dole was a member of the advisory council of the Victims of Communism Memorial Foundation and special counsel at the Washington, D.C., office of law firm Alston & Bird. On January 17, 2018, Dole was awarded the Congressional Gold Medal. He was married to former U.S. Senator Elizabeth Dole of North Carolina.
Dole passed away in his sleep on December 5, 2021. 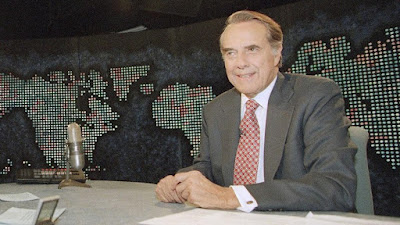 As Senator Dole would have said, “Bob Dole is a multidimensional of the TV Universe.”  He was represented in Earth Prime-Time, the Tooniverse, Skitlandia, and an alternate Toobworld to be determined later.  Here are the shows in which he portrayed himself:
EARTH PRIME-TIME 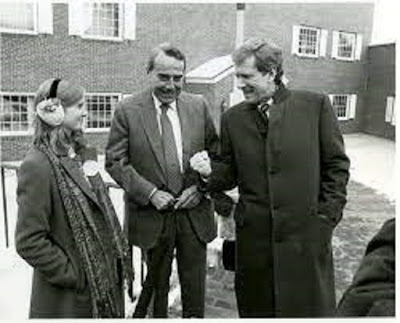 Fellow campaigner Dole chatted with Tanner and his daughter.
Murphy Brown
- All the Life That's Fit to Print (1993)

The Senator was one of those who were interviewed for a book about Murphy Brown.
Saturday Night Live – the actual episode
- Robert Downey Jr/Fiona Apple (1996) 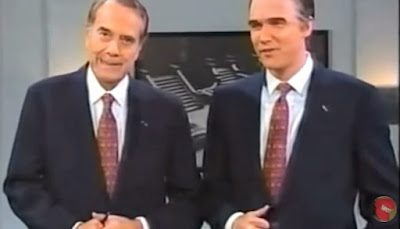 Norm MacDonald tried to cajole Dole into running for office again because it would be good for his own career.  (O'Bservation: Bob Dole serves as a good example that 'Saturday Night Live' fed three different fictional TV dimensions as will be shown.)
The X-Files
- Wetwired (1996) 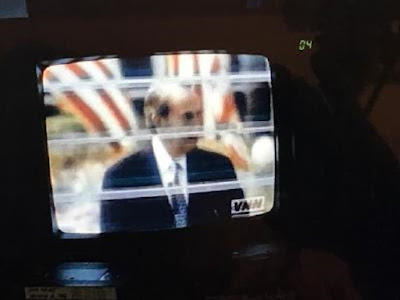 Dole and Pat Buchanan appeared in recorded news coverage on a videotape which Special Agent Scully was watching.
Suddenly Susan
- The Me Nobody Nose (1997) 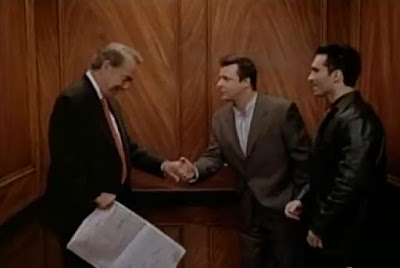 Dole was already in an elevator when Jack and Nestor entered.
Plus there were the TV blipverts in which he appeared as a member of the League of Themselves interspersed through the 1990s and beyond which displayed his serlinguistic skills: 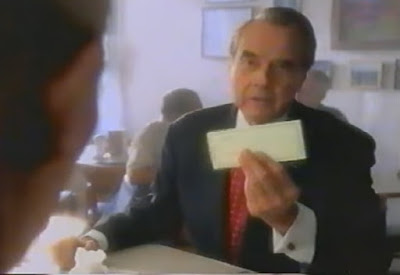 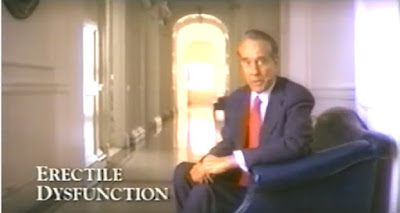 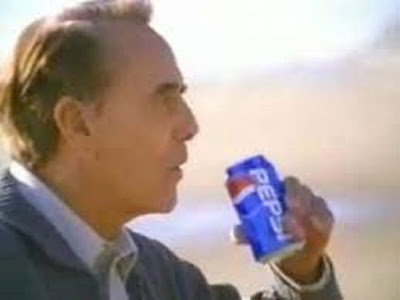 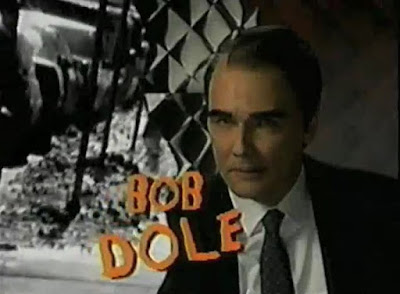 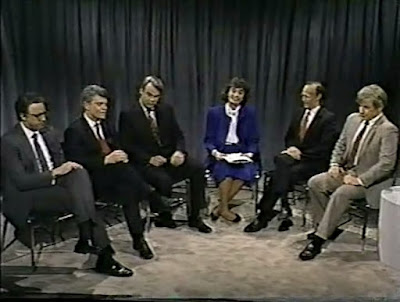 The 25 sketches with Norm McDonald playing Bob Dole and the five earlier sketches in which Dan Aykroyd portrayed the Senator from Kansas became part of Skitlandia as soon as they aired.  In my opinion, the best for MacDonald was when Dole was one of the roommates for ‘The Real World’.  With Aykroyd, it was the 1988 Republican candidates debate.  (“George, how would you like me to stick this pen in your neck?”)
Not Necessarily The News

Archival footage was used for humor.

The Simpsons
Treehouse of Horror VII 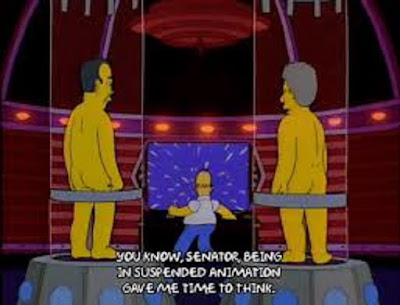 Kang and Kodos impersonate Clinton and Dole so that one of them will gain control of the United States.
Saturday Night Live
TV Funhouse 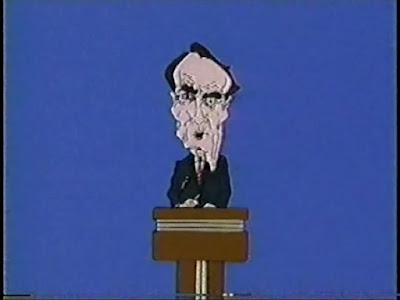 Animation is added to the audio from one of the debates between Dole and Clinton. 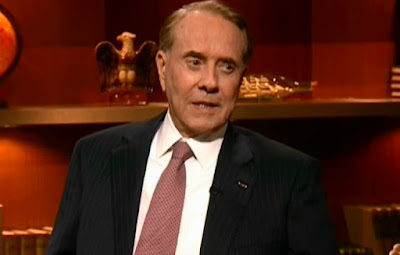 I would never have wanted Dole in the White House and yet here I am, post-Drumpf, thinking he was at least reasonable.  I’m sorry he supported Orange Gasbag in 2016, and I hope he saw the error of his ways in 2020.  But I admired how he was able to compromise and work with the other side while he was in Congress.

Thank you for your service, Sir, and welcome to the Hall of Fame. 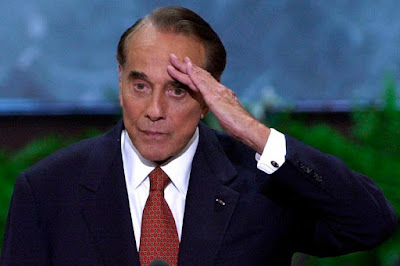 Labels: Alternateevee, As Seen On TV, Blipverts, Hall of Fame, Hat Squad, League of Themselves, Life During Prime-Time, O'Bservations, Reali-TV, Skitlandia, Twipped from the Headlines, Wikipediaphile