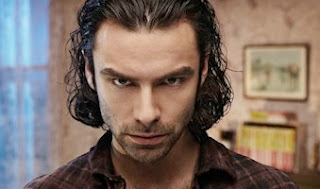 Mitchell:
So Carol from number 12 is gonna lend us "Casablanca".

Mitchell:
I'm only IN IT!

Mitchell:
Yeah, I'm just an extra, in the bar. And you can't actually see me, obviously. But I do knock over a chair at one point and you can see that.

Annie:
You were in "Casablanca"? How did you swing that?

Mitchell:
I know people. I move and shake.

After Rick's flashback to his time in Paris with Ilsa, we do see Sam pick up a chair that had fallen over.

Close-up of a glass on the table in the cafe.
Rick's hand reaches for it and knocks it over.
We now see Rick's face and he's very drunk.
Sam walks over to the table to pick up the glass and a fallen chair. 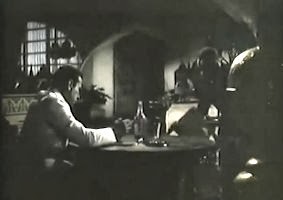 But they were the only two people in the bar at that point.  Had Mitchell been there as a waiter doing clean-up, perhaps that would account for the chair.  However, when the movie's editor reviewed the dailies, he would have noticed that an actor whom they hired was nowhere to be seen in the rushes.

I think the scene with John Mitchell occurs later when Yvonne comes back to Rick's Place with a German officer on her arm.  A French officer at the bar doesn't approve and lets her know how he feels... in French.

GERMAN OFFICER
(in English)
What did you say? Would you kindly repeat it?

FRENCH OFFICER
What I said is none of your business!

GERMAN OFFICER
I will make it my business!

They begin to fight. 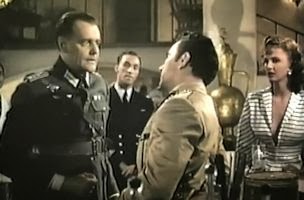 There are exclamations from people nearby. German officers
at a nearby table rise, ready to join in. Rick walks up and
separates the two men.

RICK
(to the German)
I don't like disturbances in my place. Either lay off politics or get out. 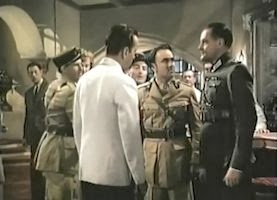 A crowd of French officers also moved in from the other side, behind the German.  I think this is where Mitchell was and in the disrupted melee he knocked over the chair.  (He could have been playing a German, but his dark looks didn't fit the type-casting for the Nazis.)  Since there were at least eight other soldiers, it could be understood why nobody noticed Mitchell's "absence".

One other possibility - when Victor Lazlo leads the band and the French supporters in the bar in singing "La Marseilleis".  The audience rises to their feet and it's pozz'ble, just pozz'ble, that somebody knocked over a chair.  And Mitchell could have been in civilian clothes, perhaps even as a citizen of Casablanca and not actually French. 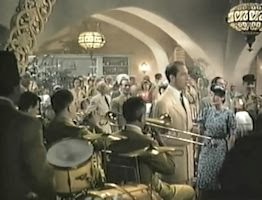 Definitely Mitchell could have been lost in that crowd and not noticed that he was missing......

Of course, in the "true" events as depicted in that episode of 'Lux Video Theatre', there was no involvement by Mitchell.