When it came to the 2012 class of the TV Crossover Hall of Fame inductees, all I knew going in to the year was that certain months had traditions. Usually I map the whole year out in advance.

February for people of color, April for the Fools, May for the ladies, October for horror. And August is the month when we salute TV Westerns.

In the past, honorees have included the Maverick brothers, Cheyenne Bodie, Brady Hawkes, Matt Dillon, Cochise, Wyatt Earp and Bat Masterson, James West and Artemus Gordon, and the Lone Ranger and Tonto.

But for this year? Up until last week, I was still undecided even with the month under way. I had in mind one option that was a bit too esoteric but quite Toobworldly. (I will definitely use it next year, Jack Lord willing.....)

But the mail held while I was on vacation was finally delivered and therein I found the sign from above - there on the cover of Entertainment Weekly was the perfect choice to be the Western character for the TV Crossover Hall of Fame in August. 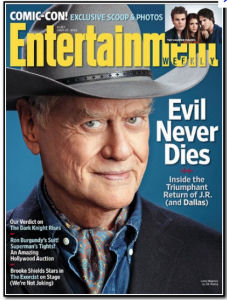 Considering it's J.R. Ewing of 'Dallas', maybe that sign came from another direction.....

(If you want to read a thumbnail biography of J.R. Ewing, click here.)

Bobby Ewing or Sue Ellen could have been eligible for the honor, but Larry Hagman as J.R. Ewing was the face of 'Dallas', as that cover proved. He is so iconic a figure in Toobworld that he dominated that issue, even with a large feature on this year's Comic-Con. 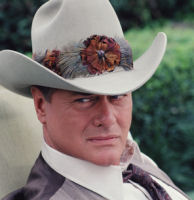 If we only dealt with the 350 or so episodes of the original series, J.R. Ewing would still stride across Toobworld like a modern Texan Colossus. In 1980, there was only one question on the minds of TV viewers from the Trueniverse that summer - "Who Shot J.R.?" That season-ender for 'Dallas' ushered in the big, outrageous tradition of cliff-hangers which would hopefully guarantee that a show's faithful followers would return in the Fall. 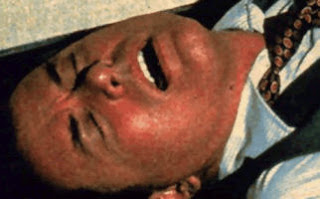 This year, 'Dallas' returned to high ratings and a guaranteed second season with the accent on the next generation of the Ewing clan. But from what I've read, the show only really comes alive whenever the 80 year old patriarch appears on screen, sharing co-starring status with his eyebrows. (I know, everybody is mentioning them. Ho hum. I just want to belong.....)

Between the two series were several reunion movies plus a handful of appearances by Hagman as J.R. on the show's spin-off, 'Knots Landing'.
And we also have to include J.R. as played by Kevin Wixted in the prequel, "Dallas: The Early Years" from 1986. (Recastaways due to the aging process are given a pass by Toobworld Central.) 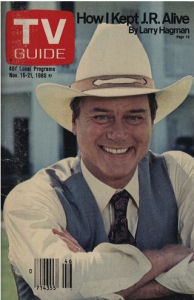 When it comes to the theoretical links from Toobworld Central, we recently made the claim that J.R.'s biological father was Colonel Ed Pace from 'The Rhinemann Exchange'. 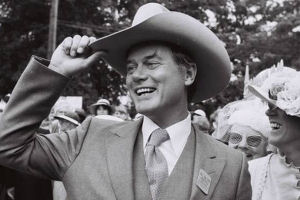 Welcome to the TV Crossover Hall of Fame......