AS SEEN ON TV: SANSA STARK 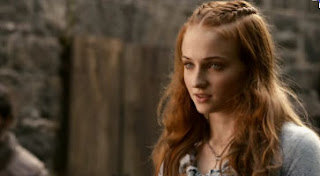 AS SEEN IN:
'Game Of Thrones'

From the "Game Of Thrones Wiki":
Sansa Stark is a major character in 'Game of Thrones'. She is played by starring cast member Sophie Turner and débuts in the first episode of the first season. She is betrothed to King Joffrey Baratheon. She adopted the direwolf Lady but Lady was executed following a dispute between Joffrey and Sansa's sister Arya. She was initially thrilled at her betrothal but has since experienced Joffrey's cruelty and watched the execution of her father Eddard Stark on his orders. She is a captive of House Lannister in King's Landing.

Sansa Stark is the eldest daughter and second child of Eddard and Catelyn Stark. She has three brothers (Robb, Bran and Rickon), a half-brother (Jon Snow) and a younger sister (Arya). She is good at sewing and embroidering. She likes poetry and songs and dreams of being a good Queen like Cersei Lannister. She has the Tully coloring like most of her siblings. She is often seen in contrast with her sister, Arya Stark.