AS SEEN ON TV: HERMAN CAIN 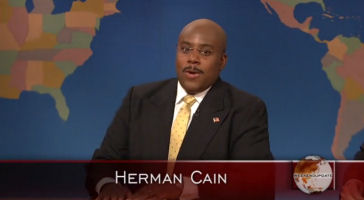 AS PLAYED BY:
Kenan Thompson

From Wikipedia:
Herman Cain (born December 13, 1945) is an author, business executive, restaurant industry lobbyist, syndicated columnist and radio host from Georgia. He was chairman and CEO of Godfather's Pizza from 1986 to 1996, deputy chairman of the board of directors of the Federal Reserve Bank of Kansas City from 1992 to 1994, and chairman from 1995 to 1996. From 1996 to 1999, Cain was president and CEO of the National Restaurant Association. Before his business career, he worked as a mathematician in ballistics as a civilian employee of the United States Navy.

Cain is a candidate for the 2012 U.S. Republican Party presidential nomination. During September and October of 2011, he was the front-runner for some time. In November, his campaign struggled to deal with several controversies, including the resurfacing of sexual harassment claims from the late 1990s, and he suspended his campaign on December 3.

That Hulu link probably won't last for very long, but hopefully the CNN report via YouTube will...... 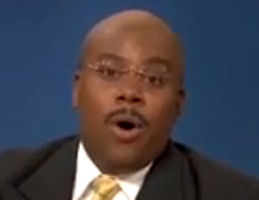