For the rest of this week, we're going to feature four of the "Canonical Five" of the victims of Jack the Ripper*, just to set the stage for next week's week-long look at the Ripper's "career" in television..... 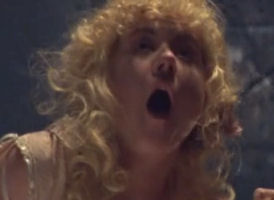 MARY ANN "POLLY" NICHOLS
AS SEEN IN:
'The Outer Limits'

From Wikipedia:
Mary Ann "Polly" Nichols (née Walker; 26 August 1845 – 31 August 1888) was one of the Whitechapel murder victims. Her death has been attributed to the notorious unidentified serial killer Jack the Ripper, who is believed to have killed and mutilated five women in the Whitechapel area of London from late August to early November 1888.

* Catherine Eddowes is not represented here, because we're only using the women as seen in the "Ripper" episode of 'The Outer Limits'.  Catherine Eddowes was seen only fleetingly as she was abducted by the mortally wounded Liz Stride in a back alley.  It didn't even merit a cast credit.
Posted by Toby O'B at 12:15 AM

Labels: As Seen On TV, Recastaways, Twipped from the Headlines, Wikipediaphile