"THE RIFLEMAN" - MAKING THE CASE 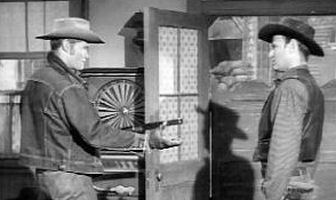 'THE RIFLEMAN'
"One Went To Denver"
Tom Birch, an old friend of Lucas McCain’s, comes for a surprise visit and Mark is upset he’s there because he is a renown bank robber; but what Lucas doesn’t know is that he plans to rob the North Fork bank.
From "The Rifleman Episode Guide"

I started writing out a long piece about the one aspect of the episode's ending that bothered me. But then I saw the good folks at "The Rifleman Episode Guide" had long ago covered the same subject, and that they did a far better job of it than I was doing.

So I'd like to quote from their televisiological observations:

This was contributed by a reader who called himself (herself?) "Renewed Fan":

This is a great episode, but with a few amusing plot holes.

Problem #2 - Tom Birch's arrest. Let's imagine, for the moment, the trial of Tom Birch for bank robbery. It would go something like this:

LAWYER: Mr. McCain, where were you during the bank robbery?

LUCAS: In the saloon.

LAWYER: And where was my client, Mr. Birch?

LUCAS: Also in the saloon.

LAWYER: Did he ever cross the street to assist in the robbery?

LAWYER: Did he draw his gun?

LAWYER: He was just having a drink with you in the saloon, wasn't he?

(Toby Note: Actually, he was just finishing up breakfast....)

Well, you can imagine from that exchange where I am heading - - Birch would have likely been acquitted of bank robbery - at least of the North Fork Bank job. [Thanks Renewed Fan!]

I agree with that last sentiment.  There were plenty of other bank jobs in other parts of the Southwest for which Tom Birth would have been a wanted man.  Marshal Micah Torrance could have held him until he could be extradited to stand trial.

My thanks as always to "The Rifleman Episode Guide". This came from their page of bloopers collected from many of the episodes.

Good catch on that goof. Pretty big one.

First: this plot was lifted for episode 1.18 of The Big Valley. An old law school friend of Jarrod's comes to Stockton to rob the bank. (I always thought this was a friend of Heath's since I first saw the episode 30-odd years ago!) Brett Skyler was played by The Shatner. (Shatner also had a role in Lee Majors' next series, The Six Million Dollar Man, as astronaut Josh Lang in Burning Bright...and had even worse luck!)

And speaking of Big Valley....Somewhere I picked up the idea that Tom Barkley (the patriarch of the Barkley clan) was from Denver...like Tom Birch. It might have been invented in a fan-fiction, not sure, although that's where I found it.