1830 – The Church of Jesus Christ of Latter Day Saints is organized by Joseph Smith, Jr. and others at Fayette or Manchester, New York. 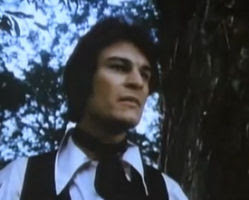 AS SEEN IN:
"Savage Journey"

AS PLAYED BY:
Richard Moll

From Wikipedia:
Joseph Smith, Jr. (December 23, 1805 – June 27, 1844) was an American religious leader and the founder of what later became the Latter Day Saint movement, popularly known as Mormonism. He was also a theocrat, city planner, military leader, and polygamist.

Raised in western New York during a period of religious enthusiasm, Smith was wary of Protestant churches and was strongly influenced by folk religion. Even as a young man, he was recognized as one who could find buried treasure through supernatural means. In the late 1820s, Smith said that an angel had directed him to a buried book of golden plates inscribed with a religious history of ancient American peoples. After publishing what he said was an English translation of the plates as the Book of Mormon, he organized branches of the Church of Christ, a church whose adherents were later called "Latter Day Saints," and popularly, "Mormons."

In 1831, Smith moved west to Kirtland, Ohio intending to establish the city of Zion in western Missouri, but his plans were frustrated when Missouri settlers expelled the Saints in 1833. After leading an unsuccessful paramilitary expedition to recover the land, Smith began building a temple in Kirtland. In 1837, the church in Kirtland collapsed after a financial crisis, and the following year Smith joined his followers in northern Missouri. A war ensued with Missourians who believed Smith had incited insurrection. When the Saints lost the war, they were expelled, and Smith was imprisoned on capital charges.

After being allowed to escape state custody in 1839, Smith led his followers to settle at Nauvoo, Illinois on Mississippi River swampland, and there he served as both mayor and commander of its large militia, the Nauvoo Legion. In early 1844, he announced his candidacy for President of the United States. That summer, after the Nauvoo Expositor criticized Smith's practice of polgyamy, the Nauvoo city council ordered the paper's destruction. During the ensuing turmoil, Smith first declared martial law and then surrendered to the governor of Illinois who promised his safety. Smith was killed by a mob while awaiting trial in Carthage, Illinois.