AS SEEN ON TV: LORD BYRON 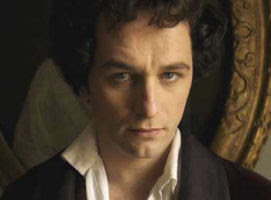 LORD BYRON
AS SEEN IN:
"Beau Brummell: This Charming Man"

AS PLAYED BY:
Matthew Rhys
From Wikipedia:
George Gordon Byron, 6th Baron Byron, later George Gordon Noel, 6th Baron Byron, FRS (22 January 1788 – 19 April 1824), commonly known simply as Lord Byron, was a British poet and a leading figure in Romanticism. Amongst Byron's best-known works are the brief poems "She Walks in Beauty", "When We Two Parted", and "So, we'll go no more a roving", in addition to the narrative poems "Childe Harold's Pilgrimage" and "Don Juan". He is regarded as one of the greatest British poets and remains widely read and influential, both in the English-speaking world and beyond.
Byron's notability rests not only on his writings but also on his life, which featured aristocratic excesses, huge debts, numerous love affairs, and self-imposed exile. He was famously described by Lady Caroline Lamb as "mad, bad and dangerous to know." (It is odd, however, that generations of scholars have taken her at her word. As Francis Henry Gribble makes clear in his "The Love Affairs of Lord Byron", chapter 11, she was herself not far from insane, morally highly equivocal, and capable of creating more than enough danger to convince any prudent man to stay well clear of her.)

Byron served as a regional leader of Italy's revolutionary organization, the Carbonari, in its struggle against Austria. He later traveled to fight against the Ottoman Empire in the Greek War of Independence, for which Greeks revere him as a national hero.

He died from a fever contracted while in Missolonghi in Greece.

At least... that is what he wanted the world to think. 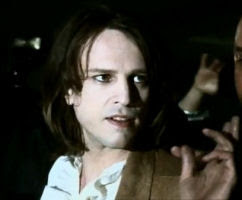 AS SEEN IN:
'The Highlander' - "Modern Prometheus"

AS PLAYED BY:
Jonathan Firth

Upon his death, he was reborn as an Immortal and continued for centuries in his wanton ways. By the 1990's, Byron had refashioned himself as a modern day rocker.

Here's the epguides.com description of his final days in that life.....

Lord Byron, the brilliant Romantic poet, is alive and well and living the decadent life of a rock star. He lives life way over the edge and has taken some promising young musicians over the edge with him. When following in Byron's footsteps tragically ends the life of Dawson's protege, MacLeod is faced with a decision -- is the beauty and genius that is Byron worth the cost? 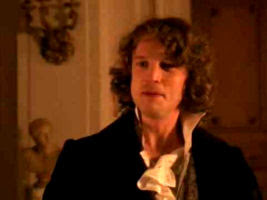 Usually when it comes to the portrayal of an historical figure, we can afford to send off most of them to other TV dimensions; share the wealth as it were. This is especially true with the historical bio-films, like with Kennedy or Lincoln; instead we keep their appearances within TV series episodes and just assume the true history as a given to fill in the blanks.

But in this case, we can keep an extra portrayal of Lord Byron in Earth Prime-Time and not have to worry about the discrepancy in appearance due to there being a recastaway. So - as there were many TV portrayals of Lord Byron - Toobworld Central decided to keep his appearance in the TV movie about Beau Brummell. That way we get to keep James Purefoy's performance as Brummell. (It would have been nice to also claim a "Born To Rerun" theory, that Lord Byron was reincarnated as Kevin Walker on 'Brothers & Sisters' since they were both played by Matthew Rhys. Unfortunately, Kevin's timeline overlaps Byron's in that 'Highlander' episode.)

How can we claim this? Because Lord Byron as seen in the past flashbacks during "Modern Prometheus" are the memories of Duncan MacLeod, influenced by how he sees Lord Byron today. And those memories can be tampered with - not only does he see Byron as he looks in the present of that episode, but he doesn't always remember that Byron had a limp due to a club foot. (This can splain away the Zonk that Firth didn't always remember to play his scenes with the handicap.)

As for Byron's change in appearance in the 1990's from how he looked back in the early 19th Century, there was plenty of time after his rebirth as an Immortal for the poet to get a facelift. A lemon-squeezy splainin. You know, easy-peasey. (Like Byron, I'm a poet and I don't even realize it!) 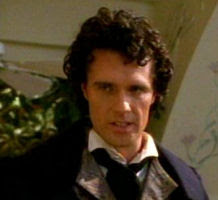 AS PLAYED BY:
Christopher Clarke

As it turns out, we can even keep a third portrayal of Lord Byron without fear of recurring the wrath of a Zonk. When the holographic program of The Doctor on board the starship Voyager decided to expand his personality subroutines, the simulation of Lord Byron was among those that he studied. (Thank you, Memory Alpha!) As this was a simulation programmed into the ship's computer, the image was interpreted by the program's designer.

Byronmania: it's not the real thing, but an incredible simulation!

How about that? It's a Three for Tuesday!