The year of the Daily Tiddlywinkydink experiment is running down in "Inner Toob", and I don't think I'll be continuing on with it into 2009. This past week has been a good example in that I wasn't sure I'd find the topics to write about each day. And to do it all over again for the next? No thanks!

I may do something along the lines of As Seen On TV instead, in which a diffferent famous person is shown as portrayed by an actor on TV. We'll see.....

Thanks to Time Warner Cable giving out with the special preview weekend of over 40 premium cable channels, I was able to grab some stuff to watch, especially 'Bat Masterson', 'Gene Autry', and 'Maverick' from the Westerns channel. And there I found the subject for today's Tiddlywinkydink, Diamond Jim Brady, an old friend of Bart Maverick's....... 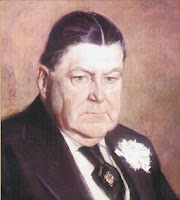 James Buchanan Brady (12 August 1856 – 13 April 1917), also known as Diamond Jim Brady, was an American businessman, financier, and philanthropist of the Gilded Age.
Born in New York City to a modest household, Brady worked his way up from bellboy and messenger. After gaining employment in the New York Central Railroad system, he became the chief assistant to the general manager by the age of 21. At 23, Brady parlayed his knowledge of the railroad industry and its officials to become a highly successful salesman for Manning, Maxwell and Moore, a railroad supply company
Known for his penchant for jewels, especially diamonds, he collected precious stones and jewelry in excess of US$ 2 million (adjusted for 2005 dollars, approx. $50 million).
Brady's enormous appetite and resultant girth were as legendary as his wealth. It was not unusual for Brady to eat enough food for ten people at a sitting. George Rector, owner of a favorite restaurant, described Brady as "the best 25 customers I ever had". A typical Brady breakfast would be: eggs, pancakes, pork chops, cornbread, fried potatoes, hominy, muffins, and a beefsteak. For refreshment, a gallon of orange juice—or "golden nectar", as he called his favorite drink. Lunch might be two lobsters, deviled crabs, clams, oysters and beef, with a few pies for dessert. The usual evening meal began with an appetizer of two or three dozen oysters, six crabs, and a few servings of green turtle soup, followed by a main course of two whole ducks, six or seven lobsters, a sirloin steak, two servings of terrapin and a host of vegetables. For dessert, the gourmand enjoyed pastries and a two pound box of candy.
"Diamond Jim" is also known for his romantic association with singer Lillian Russell, a famously voluptuous beauty of the era. It is said that her eating habits were a perfect match for his own.
A gregarious man, Brady was a mainstay of Broadway nightlife. He often dined with popular society. After further investments in the stock market, Brady accumulated wealth estimated at $12 million. He was also known for being the first person in New York City to own an automobile (in 1895). 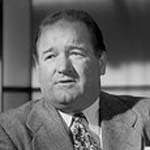 Thank you, Wikipedia....
In the last episode of the 'Maverick' series, Diamond Jim was portrayed by Barrey Kelley. Although their paths didn't cross later, both Diamond Jim and Bart Maverick appeared in the TV movie "Gambler 4 - Luck of the Draw". (For that, Dion Anderson played Mr. Brady.)