Harry Houdini (March 24, 1874 – October 31, 1926) whose birth name in Hungary was Erik Weisz (which was changed to Ehrich Weiss when he immigrated to the United States), was a Jewish Hungarian American magician, escapologist (widely regarded as one of the greatest ever) and stunt performer, as well as a skeptic and investigator of spiritualists, film producer and actor. Harry Houdini forever changed the world of magic and escapes.
Initially, Houdini's magic career resulted in little success. He performed in dime museums and sideshows, and even doubled as "the Wild Man" at a circus. Houdini initially focused on traditional card tricks. At one point, he billed himself as the "King of Cards". But he soon began experimenting with escape acts. In 1893, while performing with his brother "Dash" at Coney Island as "The Brothers Houdini", Harry met and married fellow performer Wilhelmina Beatrice (Bess) Rahner. Bess replaced Dash in the act, which became known as "The Houdinis". For the rest of Houdini's performing career, Bess would work as his stage assistant. 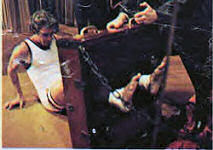 Harry Houdini's "big break" came in 1899 when he met manager Martin Beck in rural Woodstock, Illinois. Impressed by Houdini's handcuffs act, Beck advised him to concentrate on escape acts and booked him on the Orpheum vaudeville circuit. Within months, he was performing at the top vaudeville houses in the country. In 1900, Beck arranged for Houdini to tour Europe.
Houdini was a sensation in Europe, where he became widely known as "The Handcuff King". He toured England, Scotland, the Netherlands, Germany, France, and Russia. In each city, Houdini would challenge local police to restrain him with shackles and lock him in their jails. In many of these challenge escapes, Houdini would first be stripped nude and searched. In Moscow, Houdini escaped from a Siberian prison transport van. Houdini publicly stated that, had he been unable to free himself, he would have had to travel to Siberia, where the only key was kept. In Cologne, he sued a police officer, Werner Graff, who claimed he made his escapes via bribery. Houdini won the case when he opened the judge's safe (he would later say the judge had forgotten to lock it).

With his new-found wealth and success, Houdini purchased a dress said to have been made for Queen Victoria. He then arranged a grand reception where he presented his mother in the dress to all their relatives. Houdini said it was the happiest day of his life. In 1904, Houdini returned to the U.S. and purchased a house for $25,000, a brownstone at 278 W. 113th Street in Harlem, New York. The house still stands today.
From 1907 and throughout the 1910s, Houdini performed with great success in the United States. He would free himself from jails, handcuffs, chains, ropes, and straitjackets, often while hanging from a rope in plain sight of street audiences. Because of imitators and a dwindling audience, on January 25, 1908, Houdini put his "handcuff act" behind him and began escaping from a locked, water-filled milk can. The possibility of failure and death thrilled his audiences. Houdini also expanded his challenge escape act - in which he invited the public to devise contraptions to hold him - to include nailed packing crates (sometimes lowered into the water), riveted boilers, wet-sheets, mailbags, and even the belly of a whale that washed ashore in Boston. At one point, brewers challenged Houdini to escape from his milk can after they filled it with beer. Many of these challenges were prearranged with local merchants in what is certainly one of the first uses of mass tie-in marketing.
Rather than promote the idea that he was assisted by spirits, as did the Davenport Brothers and others, Houdini's advertisements showed him making his escapes via dematerializing, although Houdini himself never claimed to have supernatural powers.
In 1912, Houdini introduced perhaps his most famous act, the Chinese Water Torture Cell, in which he was suspended upside-down in a locked glass-and-steel cabinet full to overflowing with water. The act required that Houdini hold his breath for more than three minutes. Houdini performed the escape for the rest of his career. Despite two Hollywood movies depicting Houdini dying in the Torture Cell, the escape had nothing to do with his demise.
In the 1920s, after the death of his beloved mother, Cecilia, he turned his energies toward

debunking self-proclaimed psychics and mediums, a pursuit that would inspire and be followed by later-day conjurers Milbourne Christopher, James Randi, Martin Gardner, P.C. Sorcar, Dorothy Dietrich, Criss Angel, Derren Brown and Penn and Teller. Houdini's training in magic allowed him to expose frauds who had successfully fooled many scientists and academics. He was a member of a Scientific American committee that offered a cash prize to any medium who could successfully demonstrate supernatural abilities. Thanks to the contributions and skepticism of Houdini and four other committee members, the prize was never collected. The first to be tested was medium George Valentine of Wilkes Barre, Pennsylvania. As his fame as a "ghostbuster" grew, Houdini took to attending séances in disguise, accompanied by a reporter and police officer. Possibly the most famous medium whom he debunked was the Boston medium Mina Crandon, also known as "Margery". Houdini chronicled his debunking exploits in his book, "A Magician Among the Spirits".
These activities cost Houdini the friendship of Sir Arthur Conan Doyle, the creator of Sherlock Holmes. Conan Doyle, a firm believer in Spiritualism during his later years, refused to believe any of Houdini's exposés. Conan Doyle actually came to believe that Houdini was a powerful spiritualist medium, had performed many of his stunts by means of paranormal abilities and was using these abilities to block those of other mediums that he was 'debunking' (see Conan Doyle's "The Edge of The Unknown", published in 1931, after Houdini's death). This disagreement led to the two men becoming public antagonists. Gabriel Brownstein has written a fictionalized account of the meetings of Houdini, Conan Doyle, and "Margery" in "The Man from Beyond: A Novel" (2005). 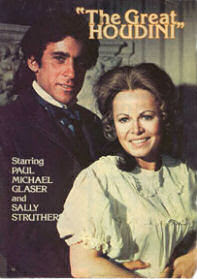 Harry Houdini died of peritonitis secondary to a ruptured appendix. It has been speculated that Houdini was killed by a McGill University student, J. Gordon Whitehead, in Montreal. Houdini died of a ruptured appendix, caused by Whitehead delivering multiple blows to Houdini's abdomen.
Although in serious pain, Houdini nonetheless continued to travel without seeking medical attention. Harry had apparently been suffering from appendicitis for several days and refusing medical treatment. His appendix would likely have burst on its own without the trauma.

When Houdini arrived at the Garrick Theater in Detroit, Michigan, on October 24, 1926, for what would be his last performance, he had a fever of 104 degrees F (40°C). Despite a diagnosis of acute appendicitis, Houdini took the stage. He was reported to have passed out during the show, but was revived and continued. Afterwards, he was hospitalized at Detroit's Grace Hospital. Houdini died of peritonitis from a ruptured appendix at 1:26 p.m. in Room 401 on October 31 (Halloween), 1926, at the age of 52.
Harry Houdini was portrayed in Toobworld several times, mostly in TV movies, but in episodes of 'Voyagers!' and 'Mentors' as well.

1976 - Houdini was played by Paul Michael Glaser, of 'Starsky and Hutch' fame, in a 1976 TV movie called "The Great Houdinis" (aka "The Great Houdini"), which was also highly fictionalized. The film focused on Houdini's relationship with his wife and mother, who were portrayed as frequently bickering (although, in reality, they had cordial relations) and on his fascination with life after death. The cast also included Sally Struthers, Bill Bixby, Vivian Vance, and Ruth Gordon. 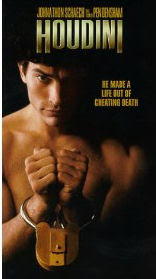 Thanks to the leeway given to recastaways due to the aging of characters, I think "The Great Houdinis" (by virtue of being the first presentation of Houdini's life, even if it was greatly fictionalized) and "Young Harry Houdini" can both be placed in Earth Prime-Time, the main Toobworld.

As for his portrayal by Michael Durrell in the 'Voyagers!' episode "Agents of Satan", it's been the Toobworld Central contention that the main characters of the show are part of Earth Prime-Time, but that they are always meddling in alternate timelines so that they follow the follow chronological flow of Earth Prime-Time. So the Houdini that they met was of an alternate dimension. 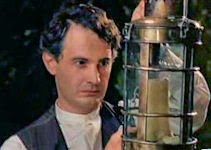 Houdini always feared that his fame as a magician would be fleeting so he undertook various activities to make an achievement that would live forever. In 1910 he brought a Voisin biplane to Australia where he completed the first airplane flight in the country's history (two other men had flown before, but Houdini was the first to take off and land successfully). He believed that this feat would be of far more historical note than his performances as a magician. Today it is barely known even in Australia.