TALES OF THE RED LEECH

'Doctor Who'
"The Crimson Horror"
&
'Star Trek'
"The Apple"
&
'Buffy The Vampire Slayer'
"Once More, With Feeling"
&
'The Memoirs Of Sherlock Holmes'
"The Golden Pince-Nez" 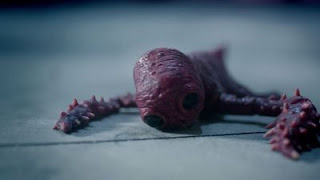 I don't think the red leech started life in the Jurassic Age of the Earth.  I think it was a visitor from another planet.

Specifically, it would be the sixth planet to be found in the Gamma Trianguli system which was located somewhere between the Tholian Assembly and Romulus in the Alpha Quadrant.  This was the planet where an unknown species (probably the Preservers) placed an artificial intelligence - a machine known as Vaal - to serve as a guardian for the planet.  10,000 years later, the original intent of Vaal was corrupted and it was stagnating the development of the humanoid population on Gamma Trianguli VI. 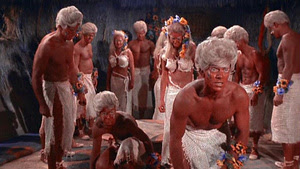 Those humanoids - at least those to be found in the vicinity of Vaal - all had white hair and a reddish hue to their skin.  I don't know what caused them all to have Bea Arthur hairstyles, but I believe their red skin was due to contact with the red leech.  As both were native to that planet, the leech's venom was not poisonous to the humanoids.  However, when it arrived on Earth Prime-Time, that venom did prove to be deadly toxic to the early humans.

How did it get to Earth?  Stowaway on a visiting starship, perhaps - before Vaal was installed, of course.  They may even have slithered on board the vessel of the Preservers when they constructed Vaal.

Enough of these red leeches must have been hidden away in the cargo hold and escaped when the Preservers made their next stop - on Earth Prime-Time. Those red leeches caused great suffering among the Silurians and were eventually wiped out... except for one escapee.  The same slimy little monster which arrived on Earth in the Jurassic period was the same symbiote suckling on the chest of Mrs. Gillyflower in 1893 AD. 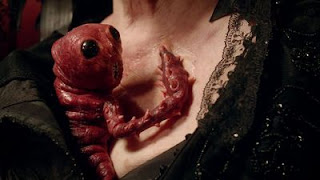 The Doctor:
“Yucky red parasite from the time of the dinosaurs pitches up in Victorian Yorkshire? Didn’t see that one coming.”

How was it able to survive for such a long period of time?  The Doctor surmised during the episode that this might have been due to some outside help, with Mrs. Gillyflower being the latest in a line of accomplices.  (But I think this could be a background reference to the Big Bad of the Great Intelligence.)

One way it could have survived would be by taking a temporal short-cut.  Perhaps it didn't endure the ages; perhaps it entered one of those 'Primeval' wormholes, which let it out at some point in the Victorian era leading up to its encounter with Mrs. Gillyflower. 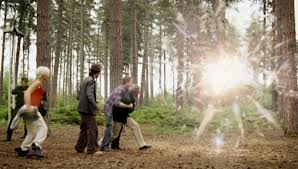 At some point, I think it may have undergone its own version of pon farr.

From Memory Alpha:
The pon farr is a Vulcan time of mating and the rituals following it are shrouded under a veil of mystery and secrecy. It is considered to be a very private matter within Vulcan society, so much that only a handful of Starfleet doctors have ever handled it. Amongst themselves, Vulcans find it inappropriate to involve themselves with another's pon farr.

During pon farr, adult Vulcans undergo a neurochemical imbalance, that takes on a form of madness (culminating in the plak tow). A Vulcan could die within eight days if their pon farr isn't satiated.  Vulcan males (and females, according to T'Pol) experience pon farr every seven years of their adult life.

Having no other of its own kind on this new planet with whom it could breed, the red leech may have forced itself on a young demoness visiting Earth from her own dimension via a Hellmouth.  This could have resulted in the birth of the demon who was also known as Mr. Sweet (Mrs. Gillyflower's name for her "silent partner".) 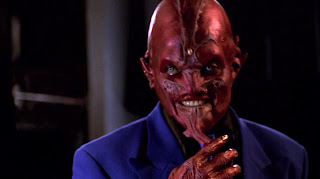 The demonic Mr. Sweet is a member of the TV Crossover Hall of Fame (October, 2005) and has that same crimson hue as his alleged "father".  And there is just something "wormy" about the way he looks.....

It was this "Crimson Horror" adventure of the Doctor which was mentioned in Dr. John Watson's story "The Adventure Of The Golden Pince-Nez":

When I look at the three massive manuscript volumes which contain our work for the year 1894, I confess that it is very difficult for me, out of such a wealth of material, to select the cases which are most interesting in themselves, and at the same time most conducive to a display of those peculiar powers for which my friend was famous. As I turn over the pages, I see my notes upon the repulsive story of the red leech and the terrible death of Crosby, the banker.

Holmes investigated the death of the banker Crosby in 1894, but it could have happened a year earlier and it took a while before it came to Holmes' attention.  That Crosby's death was horrible could mean that he was found paralyzed and his skin a reddish hue with a waxy coating.  It's pozz'ble, just pozz'ble, that Holmes discovered the truth about that red leech but was unable to capture it as it escaped with the help of Mrs. Gillyflower. 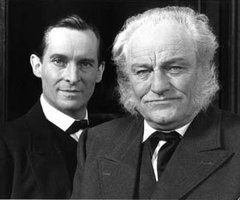 (This would tie in with "The Golden Pince-Nez" which was dramatized with Jeremy Brett as Sherlock Holmes and Charles Grey as his brother Mycroft.  Mycroft's involvement instead of Dr. Watson marks a distinction between the official Holmes of Toobworld and the original one from BookWorld.)

Of course, this is all conjecture with nothing to back it up......