As "Winston Churchill" was the primary guest character (well, asides from the Daleks) in the 'Doctor Who' episode "Victory Of The Daleks", it seemed only right to continue looking at the portrayal of the British Prime Minister in the various dimensions of Toobworld...... 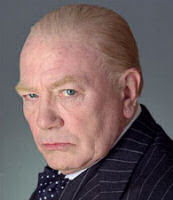 AS SEEN IN:
"The Gathering Storm"

AS PLAYED BY:
Albert Finney

AS SEEN IN:
"Into The Storm"

AS PLAYED BY:
Brendan Gleeson

"Into The Storm" was HBO's sequel to "The Gathering Storm" but many of the key players in the story of Churchill during the war years were recast, including his wife Clemmie. (Vanessa Redgrave portrayed her in the first production, and Janet McTeer took over the role for the sequel.) 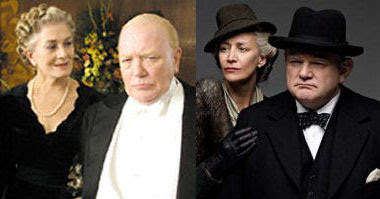 As such, Toobworld Central feels more comfortable with sending "Into The Storm" to a different TV dimension to stand as their avatars for these real-life figures of British history. And because we've accepted Richard Burton to be the official televersion for Winnie, then "The Gathering Storm" would occupy yet another TV dimension as well.

Two parts of the same story, but told from different Toobworlds.

Because Mark Gatiss originally wrote "Victory Of The Daleks" for the RTD reign over 'Doctor Who' (and possibly as a two-parter), rumors began flying about the casting several years ago. Apparently it was being considered to be one of the specials during David Tennant's last year in the role of the Doctor, and Albert Finney's name was trotted out as being asked to reprise his portrayal of Churchill.

It didn't come to pass, O'Bviously, but at least the rumor supplied us with a great graphic to illustrate the pozz'bility!

Labels: Alternateevee, As Seen On TV, Recastaways, Spin-Off City, Splainin 2 Do, Who's On TV