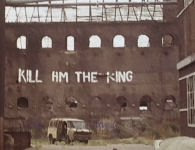 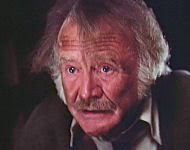 Even though it was written by Nigel Kneale who created the character, the 1979 mini-series 'Quatermass' does not belong on Earth Prime-Time as does the original production from 1953. And it is not just because of the recasting from Reginald Tate in 1953 to Sir John Mills in 1979 (with several other actors in between). In this dystopian world, there is a King on the throne of Great Britain; whereas the main Toobworld has never fallen into such a state of worldwide decay and Her Majesty Elizabeth II still sits on the throne.

It also looks like a world in which there was no Cybermen invasion because Tobias Vaughn never turned a traitor to his home planet. In fact, it looks like Vaughn eventually became the Prime Minisiter.

But there is a Toobworld in which the 1979 could reside and have another TV series keep it company.

In 1987, 'Max Headroom' burst from his music video and TV commercial roots to become the star of his own sci-fi series which was set 20 minutes into the Future. Now, this meant it was 20 minutes from the moment you watched it, I guess, no matter when and even in repeats. But I think it was 20 minutes exactly from the point of original broadcast back in '87. And as such, it was showing us a world that never existed. 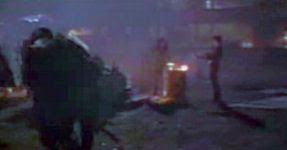 Everything about 'Max Headroom' suggested that it was a world in as much disrepair as found in the world of 'Quatermass'. However, it appeared society was on the rise again - at least the corporations were getting richer... same as it ever was. It was not as bad a depiction of social breakdown as was to be found in 'Max Headroom', which could suggest that in nearly a decade since Professor Quatermass was able to stop the destruction caused in their worldwide crisis, the times they were a-changing for the better.

So that's the position Toobworld Central takes... at the moment. The great thing about Toobworld is that it has to remain in flux because of any future rewrites that may occur.

So who knows what may happen... 20 minutes into the future?