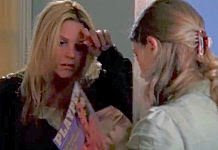 I've dealt with the issue of other TV shows mentioning 'Columbo' in the past when they should all be sharing the same TV universe.

Here's an excerpt from a piece about the series premiere of 'In Plain Sight' this year:

The main character, Mary Shannon of the US Marshals working for WitSec, not only brought the Playpen to a new witness in her charge, but she also Zonked big time by mentioning how 'Columbo' operated on TV. She went into a whole riff about how he'd let the suspect know that he was on to them by commenting on their shows - and she did it with a funny impression of Peter Falk's voice as Lt. Columbo.Hopefully an easy splainin that the Lieutenant was famous, and would often appear on TV to discuss the cases he solved, might do the trick in covering up this mess.

(Here's the actual quote, courtesy of the IMDb.com:

"In Plain Sight: Pilot (#1.1)" (2008)- Mary says in voiceover: "I really wanted to turn around and pop off one of those Columbo questions -- you know, the innocuous afterthought that lets the killer know that I know he did it: [imitating Peter Falk]: 'Excuse me, do you always where white shoes after Labor Day?'")

And this is from a post about the many Zonks to be found in the 'Monk' episode "Mr. Monk Is On The Run Part II": 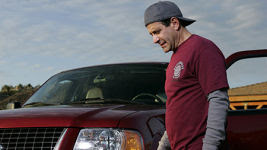 "Car Wash Columbo"
This was the nickname given to Monk by the press, when he solved the hit-and-run murder of a highway worker in Nevada. At the time, they thought he was actually Leland Rodriguez since he was hiding out under an assumed name.This isn't a problem. There was never any mention of 'Columbo' as a TV series whenever the nickname came up. So it could be that it was a reference to Monk being the car wash version of the actual detective on the Los Angeles police force.
Since it's getting more unlikely that we're ever going to see one last outing by Peter Falk as the rumpled detective, the Lieutenant is probably retired by now. And his fame has been well-publicized over the years - in fact, I wouldn't be surprised if a best-selling novel was written about him! (He may even have had a TV show based on his career, much like David 'Toma' did in the real world. If so, that would go some way towards splainin those Zonks which do mention 'Columbo' as a TV show.)
There have been other instances in which Lt. Columbo has been mentioned in TV shows:

With that last example, we actually have mention of a TV show based on the life of Lt. Columbo. And apparently it proved to be so popular in Toobworld that it's being shown over in the UK.

This would splain one side of a potential Zonk in an episode of 'Life On Mars'. DCI Gene Hunt was talking about a particular kind of evidence - I think it may have been fingerprints - when he said "Juries love 'em. Makes 'em feel like Columbo."

Now, the premise of 'Life On Mars' is that a detective from 2007 Manchester has been struck down by a car, only to find himself in 1973 Manchester on the police force. As Sam Tyler states in the opening credits, is he mad, in a coma, or is he really back in Time?

So if we go with the assumption that the Gene Genie's comment was a product of Detective Tyler's madness or a coma dream, then it's likely that Sam had been watching that same TV adaptation of Lt. Columbo's life. But if we go with the idea that he really did go back in Time to 1973, then the reason Gene Hunt knows about Columbo is because the Los Angeles police lieutenant had been in England the year before. And while there, he solved a very high profile murder in London. (See the episode "Dagger Of The Mind".)

So no matter which route you take with the issue of Sam's presence in 1973, the mention of 'Columbo' can be splained away.

And no. I'm not going to tell you how the issue of Sam Tyler's presence there was resolved on the show. Suffice to say that 'Life On Mars' is now one of my ten favorite series of all Time.