LEAGUE OF THEMSELVES - PAT KIERNAN 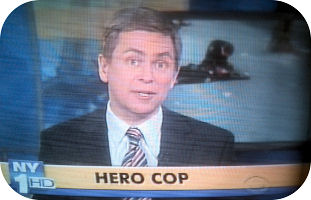 From Wikipedia:
Patrick "Pat" Kiernan (born November 20, 1968) is a Canadian-born television host, appearing as the morning news anchor of NY1 since 1997. He is widely known in New York City for his "In the Papers" feature, in which he summarizes the colorful content in New York City's daily newspapers, replete with his deadpan humor. Kiernan has also hosted game shows and appeared in films and on television either as himself or as a reporter.

From Pat Kiernan his own self:
I’m going to be on TV this morning and this evening. Many months ago, producers from CBS called and asked NY1 if we could record a newscast about the events on the pilot episode of their cop show, “Golden Boy.” We did, and tonight, my scene is finally going to air. The show is about a young cop who rises quickly through the ranks to become New York City’s youngest Police Commissioner. It’s on CBS at 10:00 p.m. and my scene is about 3 1/2 minutes into the first episode. 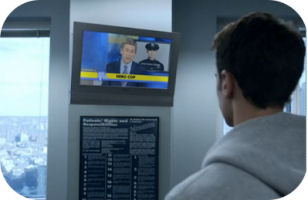 O'BSERVATION:
This was not NY1's first time at the Toobworld dance.  It has been seen in other TV shows, most notably 'The Sopranos'.  Many of its other appearances can be considered part of Earth Prime-Time, but not this one.

Since the show was a flashback from seven years in the future, I thought it might be safe to put this TV show into the same TV dimension as 'Blue Bloods'. I figured that show would be off the air by that point and so would not cause any Zonks to the theory. By that point, Police Commissioner Regan could be considered retired if they brought in a new character for the role.

However, that only worked for the future part of the show. Back in the present day, the NYC Police Commissioner may not have shown up in the pilot episode, but he was named - Dowdell. So that scuttles that theory.....

The televersion of Pat Kiernan you see every day on NY1 News and the one who hosted an episode of 'Live With Kelly' is not the same one as this incarnation. That other Pat Kiernan is the main one and can be found in Earth Prime-Time.

Labels: Alternateevee, As Seen On TV, League of Themselves, O'Bservations, TV On TV, Wikipediaphile