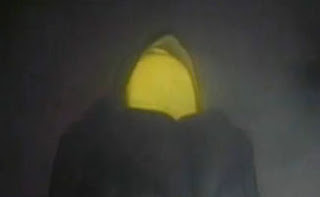 
AS SEEN IN:
"The Lathe Of Heaven"

AS PLAYED BY:
Not Applicable
(No record of voice credit)

From Wikipedia:
"The Lathe of Heaven" is a 1971 science fiction novel by Ursula K. Le Guin. The plot revolves around a character whose dreams alter reality. The story was first serialized in the American science fiction magazine "Amazing Stories". The novel received nominations for the 1972 Hugo and the 1971 Nebula Award, and won the Locus Award for Best Novel in 1972. Two television film adaptations have been released: the acclaimed PBS production, "The Lathe of Heaven" (1980); and "Lathe of Heaven" (2002), a remake produced by the A&E Network.

"The Lathe of Heaven" is a 1979 film (released in 1980) based on the 1971 Science Fiction novel "The Lathe of Heaven" by Ursula K. Le Guin. It was produced in 1979 as part of New York City public television station WNET's Experimental TV Lab project, and directed by David Loxton and Fred Barzyk. Le Guin, by her own account, was involved in the casting, script planning, re-writing, and filming of the production.

George Orr, a draftsman, has long been abusing drugs to prevent himself from having "effective" dreams, which retroactively change reality. After having one of these dreams, the new reality is the only reality for everyone else, but George retains memory of the previous reality. Under threat of being placed in an asylum, Orr is forced to undergo "voluntary" psychiatric care for his drug abuse.

George begins attending therapy sessions with an ambitious psychiatrist and sleep researcher named William Haber. Orr claims that he has the power to dream "effectively" and Haber, gradually coming to believe it, seeks to use George's power to change the world.

George attempts to dream into existence "peace on Earth" – resulting in an alien invasion of the Moon which unites all the nations of Earth against the threat. 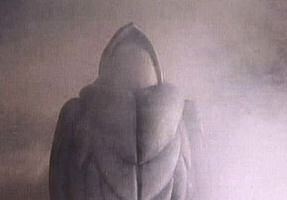 So the aliens, which slightly resemble sea turtles because Orr dreamt of them as well, never existed before Orr dreamed them into existence. And they still existed as part of the reality - in both the Literary Universe and the Toobworld Dynamic - after George Orr dreamed of a final version of his world.  (They were no longer perceived of as a threat once it was discovered that they only fired nuclear missiles at Earth because they thought this was the norm when it came to Terran greetings since Earth first fired nuclear missiles at them.)

Because of the alteration to Reality, these aliens (never identified by species) had full histories which would have been accepted throughout the TV Universe. But the fact they never existed before George Orr dream-invented them would have gone unnoticed, perhaps even by the Gallifreyan Time Lords of 'Doctor Who'. 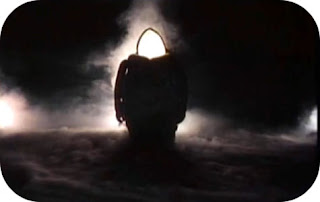 From the source:
One of those shops under the ramp was a secondhand store; the sign above the windows said ANTIQUES and a poorly lettered, peeling sign painted on the glass said JUNQUE. There was some squat handmade pottery in one window, an old rocker with a motheaten paisley shawl draped over it in the other, and, scattered around these main displays, all kinds of cultural litter: a horseshoe, a hand-wound clock, something enigmatic from a dairy, a framed photograph of President Eisenhower, a slightly chipped glass globe containing three Ecuadorian coins, a plastic toilet-seat cover decorated with baby crabs and seaweed, a well-thumbed rosary, and a stack of old hi-fi 45 rpm records, marked “Gd Cond,” but obviously scratched. Just the sort of place, Orr thought, where Heather’s mother might have worked for a while. Moved by the impulse, he went in.

It was cool and rather dark inside. A leg of the ramp formed one wall, a high blank dark expanse of concrete, like the wall of an undersea cave. From the receding prospect of shadows, bulky furniture, decrepit acres of Action Paintings and fake-antique spinning wheels now becoming genuinely antique though still useless, from these tenebrous reaches of no-man’s-things, a huge form emerged, seeming to float forward slowly, silent and reptilian: The proprietor was an Alien.

It raised crooked left elbow and said, “Good day. Do you wish an object?”

“Thanks. I was just looking.”

“Please continue this activity,” the proprietor said. It withdrew a little way into the shadows and stood quite motionless. Orr looked at the light play on some ratty old peacock feathers, observed a 1950 home-movie projector, a blue and while sake set, a heap of Mad magazines, priced quite high. He hefted a solid steel hammer and admired its balance; it was a well-made tool, a good thing. “Is this your own choice?” he asked the proprietor, wondering what the Aliens themselves might prize from all this flotsam of the affluent years of America.

“What comes is acceptable,” the Alien replied

A congenial point of view. “I wonder if you’d tell me something. In your language, what is the meaning of the word iahklu’?”

“Incommunicable. Language used for communication with individual-persons will not contain other forms of relationship. Jor Jor.” The right hand, a great, greenish, flipperlike extremity, came forward in a slow and perhaps tentative fashion. “Tiua’k Ennbe Ennbe.”

Orr shook hands with it. It stood immobile, apparently regarding him, though no eyes were visible inside the dark-tinted, vapor-filled headpiece. If it was a headpiece. Was there in fact any substantial form within that green carapace, that mighty armor? He didn’t know. He felt, however, completely at ease with Tiua’k Ennbe Ennbe.

“I don’t suppose,” he said, on impulse again, “that you ever knew anyone named Lelache?”

“Crossings in mist,” the Alien observed.

“That’s about it,” Orr said. He picked up from the crowded table before him a white bust of Franz Schubert about two inches high, probably a piano-teacher’s prize to a pupil. On the base the pupil had written, “What, Me Worry?” Schubert’s face was mild and impassive, a tiny bespectacled Buddha. “How much is this?” Orr asked.

The Alien took the nickel and sidled majestically over to a chrome-plated cash register which Orr had assumed was for sale as an antique. It rang up the sale on the register and stood still a while.

“One swallow does not make a summer,” it said. “Many hands make light work.” It stopped again, apparently not satisfied with this effort at bridging the communication gap. It stood still for half a minute, then went to the front window and with precise, stiff, careful movements pulled out one of the antique disk-records displayed there, and brought it to Orr. It was a Beatles record: “With a Little Help from My Friends.”

“Yes,” Orr said, and took the record. “Thank you — thanks very much. It’s very kind of you. I am grateful.” 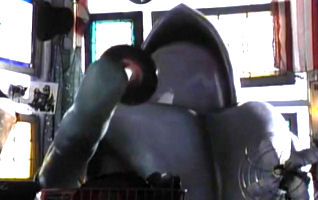 "Tiua'k Ennbe Ennbe" is the alien's name in the novel.  In the TV adaptation, George Orr is working for the alien rather than meeting him as a customer.  He addresses it as "Emmin Emmin Asta" as he's leaving to take Heather Lalache out to lunch.....