AS SEEN ON TV: A DICKENS SUPER SIX LIST

Tuesday marked the 200th anniversary of the birth of Charles Dickens. Had I known in advance about that, I might have had something prepared for that day. But I was traveling back from Florida that day and had to return to work that night, so I just added the day to my vacation's fairy tale theme.


But better belated than never I never say, so here is a Super Six List of my favorite Dickens characters as seen on TV.... 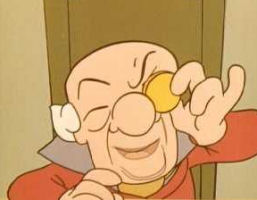 In my opinion, Quincy Magoo's portrayal of Scrooge is the greatest since Alistair Sim's in the movie universe. It's a stage production and not the actual Scrooge for the Tooniverse, which is why I gave credit to Magoo and not to Jim Backus as the voice of Magoo. (The animators get kudos, of course.) 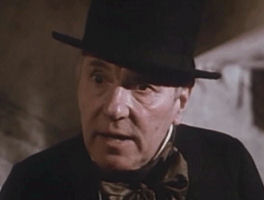 I was first introduced to Micawber because of the portrayal by W.C. Fields back in the 1940's. (I was a big fan of William Claude Dunkenfield back in high school, but I never could splain why.) And then Sir Ralph Richardson, my favorite among the "Big Three" of the 20th Century acting giants from the UK (Olivier and Gielgud being the others in that triumvirate), took on the role for TV.  Since then, the character proved how popular he was by being "spun off" into his own TV series starring David Jason in the role.  (So we'll be coming back to Mr. Micawber later this year....) 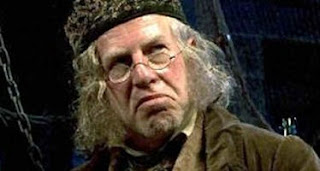 It was this role that re-ignited my interest in the career of Phil Davis. When he first showed up on screen, I thought to myself, "THAT'S the kid from 'Quadrophenia'???"  His version of this crotchety old money-grubber is a perfect example of a Dickensian character. 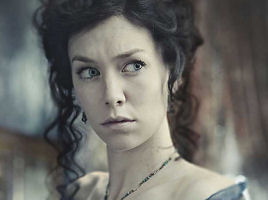 Truthfully, I should have gone with Miss Havisham, but we already featured her last month for the literary edition of "As Seen On TV". And I would have preferred finding a picture of the eternally loverly Francesca Annis in the role from the late 1960's. But Vanessa Kirby in the more recent televersion is homina thrice material as well, even if she is allegedly heartless. 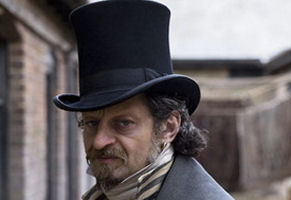 This brutal beast of a man - as played by Andy Serkis - won the Toobits Award for the Best Male Villain a few years ago. His savagery actually repulsed me, and I'm usually a bit inured to that sort of monster as seen on the toob.... 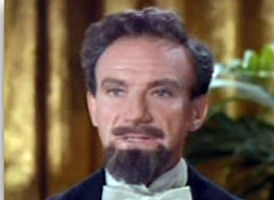 I already mentioned that Mr. Dickens himself is a TV character, and as played at least three times by Simon Callow has been inducted into the TV Crossover Hall of Fame. (Pictured at the top is his most famous portrayal of the author, from the 'Doctor Who' episode "The Unquiet Dead". But Jonathan Harris of 'Lost In Space' fame also played Dickens in this classic TV Western.

However, although Dickens did travel to America for a lecture tour, he never made it past the Mississippi River (and 'Bonanza' takes place in Nevada.) And since Simon Callow is the official televersion for the writer in the main Toobworld, I have judged this man to be an imposter, which is why his name is in quotation marks. Nevertheless, it's a great performance within a performance (which brings us full circle from Magoo's Scrooge......)

The whole point of my Super Six List - my variation of a Top Ten List - is to set a limit for myself.  And in a case like this, I could have gone on and on.  Luckily the "As Seen On TV" showcase is all about the literary characters, so there's plenty of time to feature characters like Uriah Heep (Ron Moody), Fagin (George C. Scott), Inspector Bucket (Alun Armstrong), and the Ghost of Christmas Past (Joel Grey).......