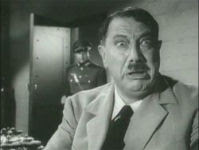 As Adolph Hitler is in the spotlight today for our "As Seen On TV" feature, I thought we'd take a look at the man in Toobworld, specifically the reason why his appearance kept changing......

There's a 'Twilight Zone' episode called "The Man In The Bottle" in which a genie grants a curio shop owner and his wife four wishes. But the wishes were booby-trapped, so that Mr. and Mrs. Castle came to regret each one. And with the penultimate wish, when Arthur Castle desired to become the ruler of a foreign country in the 20th Century who couldn't be voted out of office, the genie turned him into Adolph Hitler at the end of WWII.

Hitler is one of those real-life historical figures who prove to be irresistible to screenwriters, like Lincoln or JFK. He's made an appearance in many TV shows as well as TV movies which could have caused a zonkish headache due to all those recastaways.

The TV movies and many of the mini-series aren't really a problem; there are plenty of alternate TV dimensions which should have their own Hitler. But the series - including 'Highlander', 'Red Dwarf', and 'The Time Tunnel (all pictured below) - should all be sharing the same dimension, so having so many different incarnations of Hitler could have been a problem. 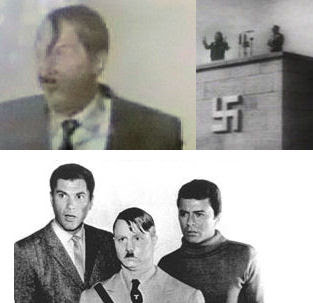 This is why "The Man In The Bottle" is part of the Toobworld Essentials collection. It provides the splainin as to why Hitler's appearance kept changing in Toobworld - that genie (or another one from a different bottle) kept replacing the Fuhrer with men who wished to be a man of power in the world.

Really, look at the "Hitler" with Tony and Doug from 'The Time Tunnel'; that's got to be a wannabe! And the same goes for that "Hitler" who survived the explosion in 'Highlander'. (As for that scene in 'Red Dwarf', that's stock footage into which Dave was inserted. However, Kenneth Hadley did portray Hitler in an episode.)

For a little variety, of course, we could always claim that a few of those Hitlers were quantum leapers from the future, when the technology was more stable.

So, unless Adolph Hitler is played by Michael Sheard on TV (and sadly, that's no longer possible), then we're seeing an imposter transplanted there by a 'Quantum Leap' or by a genie's magic.

And many of those imposters would handle the opportunity far better than Arthur Castle... of 'The Twilight Zone'.

BCnU!
Toby O'B
PS:
An interesting side-note, outside of Toobworld..... Luther Adler, who played Arthur Castle in this episode of 'The Twilight Zone', also played Hitler in two movies as well. However I don't think we should be dragging them into the TV universe since he was in command of himself as Hitler in those films. Arthur Castle was shocked by the realization that he had become Hitler in the bunker near the end of Hitler's life.
Posted by Toby O'B at 8:36 AM