CROSSING ZONE: A TRACT ON THE PUPPET PEOPLE (PART FIVE)

"Clown, hobo, ballet dancer, bagpiper, and an Army major -
a collection of question marks.
Five improbable entities stuck together into a pit of darkness.
No logic, no reason, no explanation;
just a prolonged nightmare in which fear, loneliness,
and the unexplainable walk hand in hand through the shadows.
In a moment, we'll start collecting clues as to the whys, the whats, and the wheres.
We will not end the nightmare, we'll only explain it - because this is the Twilight Zone." 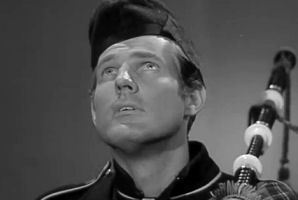 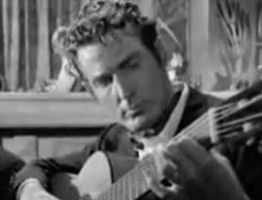 BASED ON:
A Guitar Player

COMMISSIONED BY:
An unknown girlfriend (the one in NYC)

THE REASON IT WASN'T PICKED UP:
Mistake in design/jealousy

We never learned his name, only that he made his living as a guitar player. He was never in one place very long, working in clubs up and down the East Coast, from New York to Miami. And he may have had a girlfriend in every one of the cities he played.

The girlfriend in New York City visited the doll-maker and commissioned the doll based on him.

That the doll-maker crafted the doll into a bagpipe player instead of a guitar player could be due to:

The guitar player may have been married to a woman in Mexico City. She was a flamenco dance and his former partner in an act that worked some of the bars and clubs down there. And he probably never bothered to get a divorce before he abandoned her for a life in the United States. 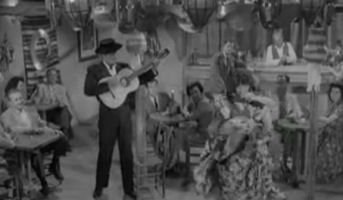 The girlfriend in Manhattan probably found out about his deception and decided he wasn't worth such a nice gift as a doll in his likeness. (Personally I would have picked it up and when I saw that he was a bagpipe player, I would have sent it to him with a note attached: "I know you're married. Go blow yourself.")

O'BSERVATIONS:
Nightclub owner Clark Allen only had three TV shows, four roles, to his credit in Toobworld. Except for the T-Zone episode "Five Characters In Search Of An Exit", in each of them he is listed only as "Guitar Player". 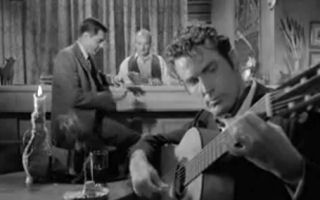 [Today's entry in this series is dedicated to Joe Beninghof, who teaches guitar in Colorado.  He does NOT have a girl in every port because he got it right and married the perfect girl.]